When is a Segway not a segue?

I recently came across this sentence in an article about Royal Ballet dancer Eric Underwood:
"And while he may not have intended for his “black and white” remark to be a pun, it does create a segway into ballet and its relationship with race."

"Segway" is a proprietary name for a kind of scooter. One has to assume that this is not what the writer had in mind. 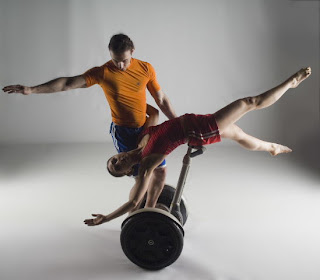 The correct spelling (and indeed the inspiration for the name "Segway") is "segue", which admittedly is a pretty unusual way in English to transcribe a word sounding like "SEGway". But, like so many musical terms, this one is originally Italian, segue being the third person singular present of seguire (to follow). It came into English, again like many Italian musical terms, in the 18th century, and has been used since then as a musical direction (1) to proceed to the following movement without a break, and (2) to continue a formula which has been indicated.

It chugged along as a technical term known only to musicians for a couple of centuries, until the mid-20th century, when musicians started to use it to mean "transition without a break from one melody or song to another". By the 1970s, "segue" had expanded beyond the world of music to cover any kind of transition, and was being used as both a noun and a verb.

All of the conjugated forms of "segue" look a little odd, but here they are: segues, segued, segueing.