Here in Canada, the deadline for making contributions to our tax-sheltered personal pension plans, known as RRSPs (Registered Retirement Savings Plan) is looming, so if you're Canadian, you may be thinking about your pension. “Pension” comes from a Latin word, pensus (weighed). The Romans made payments by weighing the gold or silver, so pensus came to mean a payment. When “pension” came into English in the 1400s, it was any kind of payment or wage, but it soon came to apply to a retirement payment. The first instance we have of this sense is from Cardinal Wolsey asking Henry VIII for one; shortly afterwards, he was arrested for treason. Beware of what you ask of your employer!
Posted by Katherine Barber at 7:03:00 AM 1 comment:

Ok, so I know punctuation is not the most riveting topic, and indeed may even be coma-inducing, but nonetheless, there are rules, and most of them make your sentences easier to understand. The problem is that if you sit down to an explanation of all the rules governing all the punctuation marks (there's a good one in the end matter of the Canadian Oxford Dictionary, by the way), you quickly get overwhelmed. I am hereby starting a new "punctuation tip" branch of Wordlady, and today's tip is ... commas between coordinate clauses. Yes, yes, be still your beating heart. Actually you don't need to know the grammatical terms. First, memorize this (almost) rhyming jingle:

and or
but nor
yet for
so
whereas

I love the Wordlady blog, and I recommend it to all my friends.
Katherine's blog is full of useful tips, so I always read it.
Katherine always makes the language fun, whereas other usage commentators can be dry and judgemental.
You can find out when there is a new post by friending her on facebook, or you can send her an email to be added to the mailing list.
Proper punctuation can be very helpful, yet many people do not follow the rules.
The comma is not the only punctuation mark, nor is it the most interesting one (just wait till we get to the SEMI-COLON!!!)

A reader has inquired why I spell the abbreviation for "United States" as US, without periods. He points out that The Canadian Press stylebook recommends periods, on the grounds that otherwise it could be confused with the pronoun "us". Like all style guide editors, the CP stylebook makes some of its own choices where options are available. I really don't think it's possible for "US" to be confused with the pronoun, because it is always capitalized, and always preceded by "the" or used as a modifying noun: "US deficit to balloon". In other words, syntactically, US can simply not be confused with "us". (A recent very successful American history textbook series played on this, however, with the very clever title "The Story of US".) In any case, the Canadian Oxford Dictionary entry is for "US" without periods.
Posted by Katherine Barber at 10:57:00 AM 3 comments:

Email ThisBlogThis!Share to TwitterShare to FacebookShare to Pinterest
Labels: periods, punctuation, US or U.S.

It's the beginning of a long weekend in some Canadian provinces, with Monday's holiday called "Family Day" here in Ontario and in Alberta. So, a good time to look at the surprising origin of the word “family”: the Latin word famulus (servant). From famulus came the word familia (a household of servants), and this is what “family” meant when it entered English in the 1400s.(When I was a teenager, a favourite reproach from my mother was “You treat this place like a hotel!”; had she but known, I was merely being a precocious etymologist.) It was not until surprisingly late, the mid-1600s, that the word came to mean a group of people related to one another. Before that, we used the Anglo-Saxon “kin” and “kindred”.
Posted by Katherine Barber at 5:25:00 AM 5 comments:

Will you be offering a heart-shaped box of theobromines to your Valentine on Monday? Frightfully scientific though this sounds, you may well do so, for theobromine is the active ingredient in chocolate. When the Swedish botanist Carolus Linnaeus was classifying the plant system in the 1700s, he had to think up a name for the genus of the cacao tree. Being a chocolate lover, he called it Theobroma, from the Greek theo (god) and broma (food): the food of the gods.
Posted by Katherine Barber at 4:30:00 AM 1 comment:

Of dead ends and dead locks

A rather intense argument broke out on a friend's facebook wall recently.

It all started when someone announced in indignant tones (I swear I could hear them leaping off the facebook page) that they had heard someone using "dead-end" as a verb. Shock horror. Clearly this was wrong. The assumption was that everyone would agree it was wrong, because, well, it just was. Another fb friend weighed in to agree.

But then someone else with a shit-disturbing streak (we'll call her WL for short) disingenuously asked why it was wrong. Well, harumphed one of them, it was a noun being used as a verb. Verb+noun was "standard" and besides clearer and more precise. WL, not sure why, for instance, "send a fax" or "make a phone call" was more standard than "fax" or "phone", nor how "dead-ended" was unclear and imprecise, countered that in that case we couldn't say this discussion was going to end badly, could we, and suggested everyone go and visit Verbs: it's ok to do this. Really! Interlocutor castigated WL for thinking she had a monopoly on language expertise (it's quite amazing how uncivil people can get with strangers on the internet), but retreated somewhat, saying that she wasn't against nouns being used as verbs in principle (though that is what she had said in the first round), but only to clumsy formations or infelicitous neologisms (implying that "neologism" was necessarily A Bad Thing). In her opinion, "come to a dead end" was felicitous and "dead-end" wasn't. I find these words are always trotted out when people are making language objections and have nothing objective to fall back on.

One can always find counterexamples; in this case, a good one is "deadlock" which (obviously, I would say) started out as a noun but is now used as a verb, at least passively, for example in the phrase "the talks are deadlocked", without anyone objecting that "the talks have come to a deadlock" would be better or more elegant or less clumsy (in fact I think the latter sounds clunkier). At least I don't think anyone would object, but I'm always amazed at what raises people's ire.

As for "dead-end", it seems to have been in use as a verb since about 1900. Not much younger than "deadlock", in fact, and certainly not very "neo-" for a "neologism"! It is in the Oxford English Dictionary, the Canadian Oxford Dictionary and even its abridged paperback version, which suggests we had plenty of evidence for it. In fact, I think any serious dictionary would be remiss to omit it.
Posted by Katherine Barber at 8:00:00 AM 1 comment:

Email ThisBlogThis!Share to TwitterShare to FacebookShare to Pinterest
Labels: dead-end, nouns as verbs, verbing of nouns 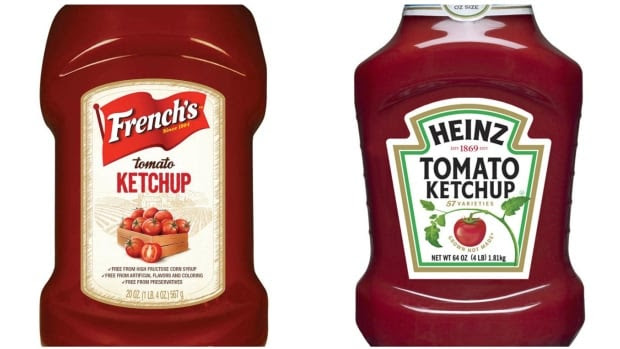 In honour of Chinese New Year, let us look at a word whose origins are, surprisingly, Chinese: ketchup.

In Chinese dialect, k'e-chap meant “brine of pickled fish” (probably disgusting on french fries). Around 1700, the British discovered this condiment: a pickled sauce including anchovies or oysters, mushrooms and walnuts, but no tomatoes were involved, for they were expensive and besides viewed as a suspicious American import by the English till the late 1800s. "Ketchup", to Jonathan Swift, Byron, and Dickens (among the many great names in English literature who have felt the need to mention it) was probably more like Worcestershire sauce.

In 1876, Heinz, needing to find a way to preserve the notoriously perishable fruit which by then the US was producing in large quantities, started using the word “ketchup” for a sweetish pureed pickle of tomatoes.

The form "catsup" evolved out of "catchup", which is the earliest form for which we have evidence in English. For a while, "catchup/catsup" and "ketchup" were in contention on both sides of the language, but "ketchup" quickly won out in Britain while both forms survived in the US. "Catsup", however, which in the mid-20th century was the favoured form in the US, has definitely been on the wane since about 1970, as this Google ngram shows.