Why is there a silent p in ptarmigan?

To honour the return of birds in the spring and the birthday of the renowned bird painter John James Audubon (born 26 April, 1785), let's look at the hard-to-spell ptarmigan, a grouse-like bird found in the far north.

Its name comes from a Gaelic word, tàrmachan, meaning “grumbler” or “croaker”, presumably in reference to the sound the bird makes. In Gaelic, as you see, there was no “p” at the beginning of the word. But in the late 17th century, some meddlesome person, thinking the word was derived from the Greek ptero (meaning “feather” or “wing”), stuck a “p” at the beginning to reflect its “Greek” origin (that it doesn't have). It's been there ever since.

Thank goodness they didn't get a hold of the Canada … pgoose!

Tiptoe through the tulips

It's been a late spring in southern Ontario, but even here a few brave tulips are beginning to poke through the ground. In more temperate climes they must be blooming, not to mention providing tasty snacks for squirrels (for rhe etymology of "squirrel", please click here.

Tulips came to Europe from their native Turkey in the 16th century, so not surprisingly their name comes from a Turkish word:  tulbant or tulibant.  This word did not originally designate the flower, however; it is simply the Turkish word for "turban". The open flower of a tulip was thought to resemble the headgear.

But whereas the name for the flower came directly into the western European languages from Turkey, retaining the original "l", the name for the hat took a more circuitous route and acquired an "r" along the way. It is possible that the people of southwestern India, or the Portuguese who colonized parts of India, changed tulbant into turbant. This eventually became our turban. Fortuitously, really, because it would be very odd to read about people wearing tulips on their heads. 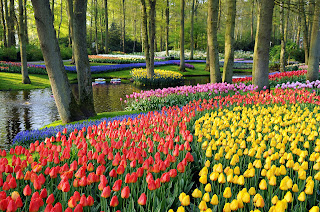 The Guardian is encouraging people to send in examples of the most execrable arts jargon they have found, launching the campaign with this:
"Combining radical notions of performativity and the body as liminal space, my practice interrogates the theoretical limitations of altermodernism. My work, which traverses disparate realms of object-making such as painting and performance, investigates the space between metabolism and metaphysic".

My best recent example:
"The arch antagonist of received ballet wisdom, William Forsythe’s choreographic provocations have earned him as much notoriety as acclaim. Yet beneath the anarchic comedy, the fiercely deconstructive and random-seeming surface of a work such as the second detail there lurks an ungainly but defiant elegance, a vision of dance that forces us to look anew at ballet’s meanings and potentialities."

Or paste your example in the comments!

I don't know about you, but in the last few months I've noticed a sudden upsurge in the use of the phrasal verb "reach out". It used to be that reaching out had some kind of emotional connotations; either you reached out for help or you reached out to help someone. But more recently it seems to be just a synonym of "contact". In one recent TV program I heard it used at least four times to mean "make a phone call" (or I suppose it could also have potentially covered  "send a text or email to").  I do not know where this is coming from. Have you noticed it too?


Meanwhile, the noun "outreach" in the sense "The activity of an organization in making contact and fostering relations with people unconnected with it, esp. for the purpose of support or education and for increasing awareness of the organization's aims or message" is older than you probably think, with the first evidence dating from 1899. However, this noun certainly increased in frequency quite dramatically starting in the 1960s.

Here's an interesting piece of trivia about the verb "reach". Originally its past tense and past participle were "raught" (analogous to "teach" and "taught"). But in the Middle Ages the verb became regular. For a while "teached" also tried to supplant "taught" but "taught" proved more resilient than "raught".

Do you enjoy Wordlady? Please use the buttons below to share on social media.


P.S. If you find the English language fascinating, you might enjoy regular updates about English usage and word origins from Wordlady. Receive every new post delivered right to your inbox! SUBSCRIPTION IS FREE! You can either:
use the subscribe window at the top of this page
OR
(if you are reading this on a mobile device): send me an email with the subject line SUBSCRIBE at wordlady.barber@gmail.com

By special request from a Wordlady reader, today's word is "magazine". Where does it come from and why do we use it for such disparate things as the place for the ammunition in a gun and a glossy periodical?

Going way back, the word comes from Arabic maḵzan, maḵzin (storehouse), derived from the verb ḵazana (to store up). This was borrowed into various Romance languages in the Middle Ages, including French, where magasin means "store" to this day.

English didn't borrow the word from French until the late 1500s, and used it specifically for a storehouse for ammunition and other military supplies.  But the general sense of "storehouse for assorted merchandise" chugged along beside it, and was also used figuratively, for stores and collections of all sorts of things, including knowledge. By the 1630s, books providing information on a specific subject were being called "magazines", and in 1731 a new periodical publication saw the light of day, calling itself The Gentleman's Magazine, with this explanation for its title:


"This Consideration has induced several Gentlemen to promote a Monthly Collection to treasure up, as in a Magazine, the most remarkable Pieces on the Subjects abovemention'd."

Obviously, the name took off, and with the advent of broadcasting in the 1920s, the word "magazine" was extended again to cover radio and television shows covering a variety of subjects.

Meanwhile, however, the "storehouse for ammunition" sense was alive and well. In the 1850s, much smaller supplies of ammunition, the cartridges for guns, also came to be known as magazines.
Canadian readers may be entertained to learn that the first mention of the word "magazine rack" found by the Oxford English Dictionary is in the Eaton's catalogue: