Things that go bump in the night

With Halloween on the horizon, there is much talk of ghosts.

Why is there an h in "ghost", when there is none in "go" or "god"?
You might be tempted, looking at the word "ghoul", which we also see a lot at this time of year, to leap to the etymological conclusion that the words are connected. But you would be wrong. "Ghoul" comes from the Arabic ghūl , from a verbal root meaning ‘to seize’, and entered English only in the late 1700s.

"Ghost", on the other hand, dates back to the Anglo-Saxons, and was spelled without an H by them and for centuries afterward. For them, the word meant "soul", a usage which now survives only in the phrase "give up the ghost". It was also used for the Spirit of God, a usage that survives, but only barely, in some Christian denominations who still refer to the Holy Ghost. Most, however, have switched to "Holy Spirit", probably because generations of Sunday School students have been perplexed by what Casper is doing as part of the Holy Trinity. The now predominant "spectre" sense dates from the late 1300s.

We owe this particular orthographic annoyance to the printer Caxton, who set up the first printing press in England in 1476. He had discovered printing in Flanders, and was probably influenced by the Flemish spelling of the word, gheest.

Despite the influence of the printers in standardizing spellings, though, it is quite surprising that this quirky spelling established itself. Its ultimate success can perhaps be ascribed to the trend in the 1500s to insert silent letters into words to reflect their etymology. Not knowing any better, people perhaps thought that the new "h" in "ghost" was like the new "b" in "debt" or the new "p" in "receipt", which evoked the Latin origins of those words.

Caxton also tried to impose this (to quote the Oxford English Dictionary) "capricious substitute for g" in ghoos , ghoot , gherle, which you will probably not recognize as "goose", "goat", and "girl". Obviously (and fortunately!) he did not succeed with these.


For the perennial question whether to spell Halloween with an apostrophe or not, see this post and for the pronunciation, see this post. For the etymology of "pumpkin", see this post.
Posted by Katherine Barber at 4:10:00 AM No comments:

I was just reading my Toronto Star, ever a rich source of spelling mistakes, and noticed a headline "Rowdy and raucus". What they meant was "raucous", but when I did a search on google for the misspelling, I was surprised to find almost half a million instances, so the Star  headline editors are not alone. The Latin etymon (that's a fancy - but much shorter - word meaning "word from which another word is derived") of "raucous" is in fact raucus, meaning "harsh or hoarse", and this is indeed the meaning that "raucous" had when it was first borrowed into English in the 1600s (and is still the sense of the French word rauque). The "boisterous, noisy; rowdy, disorderly, uproarious" sense is really quite recent, dating from the mid-1800s.
Don't forget you can share Wordlady posts with your facebook friends or twitter followers simply by clicking on the "Share this" buttons in the left-hand column!
Posted by Katherine Barber at 3:42:00 AM No comments:

Email ThisBlogThis!Share to TwitterShare to FacebookShare to Pinterest
Labels: spelling

Why the apostrophe is doomed

Diwali, the Hindu, Sikh, and Jain festival of lights, from the Sanskrit word dipavali (a row of lights), starts next Wednesday. A good opportunity to look at one of many words we have borrowed from Hindi: dinghy. A dingi was a small rowboat used on rivers in India. We originally spelled it “dingy” but then needed to distinguish it from the adjective, and to show that the “g” is hard, we added the “h”.
Posted by Katherine Barber at 4:54:00 AM No comments:

Email ThisBlogThis!Share to TwitterShare to FacebookShare to Pinterest
Labels: etymology, word history, word of the week

The piano is my forte 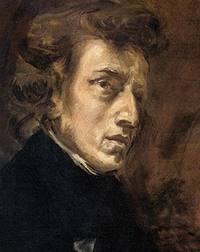 Today is the 152nd anniversary of Chopin's death, an appropriate day to look at the word "piano".  When pianos were first invented, around the beginning of the 1700s, the available keyboard instruments were the clavichord, which was very expressive but had the disadvantage that, well, you couldn't really hear it, and the harpsichord, which you could hear, but it had no mechanism for playing quieter or louder; the harpsichord had two volume levels: on or off.
Around 1700, one Bartolomeo Cristofori, who worked at the Medici court in Florence, invented a new instrument which created sound by a hammer striking a wire (whereas the harpsichord depends on a plucking mechanism). Because the volume could be varied by how hard the hammer hit, this new instrument was called a gravicembalo col piano e forte (‘harpsichord with soft and loud’). Not surprisingly, this got shortened to "piano e forte", then to "pianoforte" and within 70 years of its birth, to "piano".  No doubt Cristofori would have spluttered, "But, but, it plays forte TOO! That's the whole point!!"
The Italian musical terms piano (soft) and forte (loud) established themselves in English at about the same time. Piano literally means "plane" or "flat". It comes from the Latin word planus. Because the flat areas in Italy are in the lower coastal parts of the country, the word also came to mean "low", first in reference to height and then in reference to sound. Forte literally means "strong".
And here's my favourite bit of Chopin (both piano and forte) to enrich your day (starting at 0:30):

The lady doth protest too much

A faithful Wordlady reader has inquired about the usage of the verb "protest": does one protest something or protest against something? She had been taught that adding "against" was redundant. In fact, the verb "protest" has been used with "against" since the verb first started being used in the "utter an objection" sense in the 1500s, and in Britain the usage is still always with "against". In the US, however, people started dropping the "against" in the late 1800s; some claim that the usage came about because newspapers wanted to save space. Whatever the facts of the matter, "protest something" is now firmly established in North American usage and is now as common as "protest against something". One cannot say that either is wrong.
Posted by Katherine Barber at 6:11:00 AM 2 comments:

Email ThisBlogThis!Share to TwitterShare to FacebookShare to Pinterest
Labels: protest, protest against 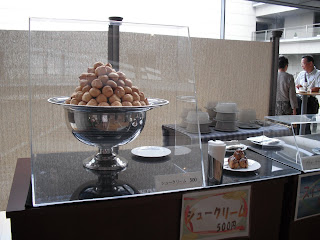 I was recently at a ballet performance in Japan (you can see pictures of it here) and was quite thrilled to discover that the New National Theatre in Tokyo serves chocolate-glazed cream puffs at the intermission. How very civilized. Because I felt that I ought to have the full Japanese theatre experience, I of course indulged. Way better than the cookies we get at the theatre in Toronto! This got me thinking about the word "profiterole": why are small cream puffs called this? In French, "profiterole" is a diminutive of the word "profit" which, in addition to having the monetary sense it has in English, also has a more general sense of "benefit". Apparently the Renaissance author Rabelais (who was as inventive with the French language as Shakespeare was a few decades later with English) invented the word "profiterole" to mean "a little benefit or gratification" and shortly thereafter it was being used for small dumplings. In the next century, such dumplings were made by hollowing out a small bread roll, stuffing it with a filling, and then simmering it in soup. The similarity with little cream puffs meant that by the 19th century they also came to be known as "profiteroles", and we English speakers quite happily borrowed both the dessert and the word from the French.
Posted by Katherine Barber at 1:21:00 PM No comments: