What is destroying the English language? 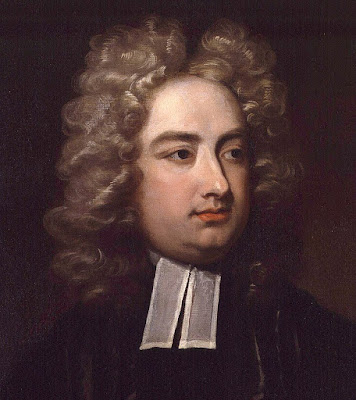 I was most entertained to read Jonathan Swift's 1712 rant about the decline of English:

"PROPOSAL
FOR Correcting, Improving and Ascertaining
THE English Tongue"

in which he takes aim at a particularly evil band of corrupters of the language:


There is another Sett of Men who have contributed very much to the spoiling of the English Tongue;

Who are these people?


I mean the Poets,

Well, it makes a change from blaming These Young People Today for destroying  the language!

What are these nefarious POETS doing?


These Gentlemen, although they could not be insensible how much our Language was already overstocked with Monosyllables;

What an odd notion, that there are too darn many monosyllabic words in English. Cat? Dog? Milk? Away with them, I say!


yet, to save Time and Pains, introduced that barbarous Custom of abbreviating Words, to fit them to the Measure of their Verses;


and this they have frequently done, so very injudiciously, as to form such harsh unharmonious Sounds, that none but a Northern Ear could endure:

Yep, while we're at it, let's slag off people from Yorkshire and other points north.


They have joined the most obdurate Consonants without one intervening Vowel, only to shorten a Syllable: And their Taste in time became so depraved, that what was a first a Poetical Licence, not to be justified, they made their Choice, alledging, that the Words pronounced at length, sounded faint and languid. This was a Pretence to take up the same Custom in Prose; so that most of the Books we see now a-days, are full of those Manglings and Abbreviations.

By now, you're wondering if Alexander Pope and his ilk were LOLing in their poems, but no. Here is their dastardly innovation:


Instances of this Abuse are innumerable: Drudg'd, Disturb'd, Rebuk't, Fledg'd, and a thousand others, every where to be met in Prose as well as Verse? Where, by leaving out a Vowel to save a Syllable, we form so jarring a Sound, and so difficult to utter, that I have often wondred how it could ever obtain.

As everyone knows, those words should be pronounced "drudgèd", "disturbèd","rebukèd", and so on. As indeed they were, until the 17th century. I'm pretty sure poets weren't to blame for the switch to the "disturb'd" pronunciation.

I happen to sing in a church choir where we use these old-fashioned pronunciations so often that we have to be reminded, when performing modern settings of the Magnificat, NOT to sing "he has fillèd the hungry with good things"! One of my fellow choristers even reports that when her daughters were children, they had spent so much time in church that they were convinced that the right way to form the English past tense was to pronounce the -ed ending.

Three hundred years from now, what pet peeves of ours will English speakers be laughing at?