Interesting article about trends in teenage girls' language and how they affect the language as a whole. Click here.
Posted by Katherine Barber at 5:40:00 AM 2 comments:

Today is Shrove Tuesday, otherwise known as Pancake Day from the tradition of eating pancakes to use up the remaining eggs before the beginning of Lent. A perfect time to look at the word "crêpe". Both "crêpe" and "crisp" come from the same Latin word, crispus. But before you leap to the conclusion that this is because crêpes are crispy around the edges, I have to tell you that it is a lot more convoluted (and interesting!) than that.

Back in Latin, crispus meant "curly-haired". Surprisingly, this word was borrowed into English very early, back in Anglo-Saxon times when English did not borrow heavily from Latin except for church terms. Intriguing. Why did the Anglo-Saxons need to borrow this word? Perhaps Anglo-Saxon hair didn't have the curly gene whereas Italian hair did? Whatever the reason, the word had been borrowed before 900, when Bede described someone as having "crisp locks".

Meanwhile, the French had also inherited crispus  from Latin but turned it into cresp. They also used it of hair, but also of other wavy things, and by 1285 they were using it of thin pancakes, not because they were crispy around the edges but because they were wrinkly around the edges (crêpe has never had in French the "crunchy" sense that "crisp" has in English). The French carried on eating cresps -- which became crêpe when the the s fell out of the word (memorialized only by that circumflex) -- while the more literally-minded English ate the culinarily identical "pancakes" for several centuries.

Auguste Escoffier of the Savoy Hotel, late Victorian and Edwardian England's version of a celebrity chef,  introduced the English to crêpes Suzette. 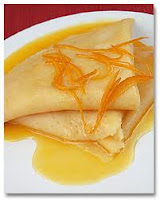 No doubt Mrs Patmore would have served them to the Crawleys at the Downton Abbey dinner table. Drenched in a boozy orange sauce, these were the only crêpes the English knew about until the crêpe craze of the 1970s made crêpes ubiquitous as an all purpose wrapping for all kinds of fillings.
Posted by Katherine Barber at 4:58:00 AM 7 comments:

Next Wednesday, February 22nd, marks the beginning of Lent, a time when many people eat fish rather than meat for religious reasons. This practice is at the origin of the word “halibut”. Various kinds of flatfish were called “butt” in the Middle Ages, possibly because their heads had a blunt shape like the butt end of something. At the time, the word “holy” was pronounced HALLY or HOLLY. A “hally butt” was, therefore, a flatfish eaten on holy days, a “holy flatfish”.
Holy flatfish, Batman! 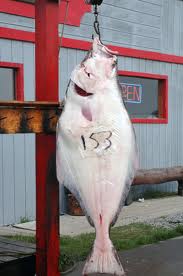 If you are planning on serving your sweetheart passion fruit this coming Valentine's Day as being particularly appropriate, you might want to think again. When the word “passion” first came into English from a Latin word meaning “suffering”, it was used in particular for the sufferings of Jesus (as it indeed still is). Only later did the sense of “affliction” morph into “extreme love”, which can, alas, be an affliction. But the original meaning survives in the passion fruit. It is the fruit of the passion flower, which was called that because its parts, people thought, recalled Christ's crucifixion: the blossoms look like the crown of thorns, the styles like nails, and the leaves and tendrils like scourges. 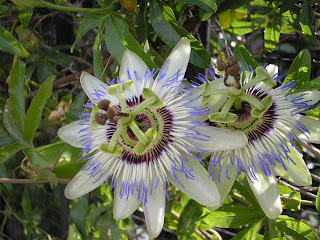 Kind of cuts your appetite, doesn't it? Chocolate is safer! (And for more on that, visit this post.)
Posted by Katherine Barber at 1:24:00 AM 1 comment: 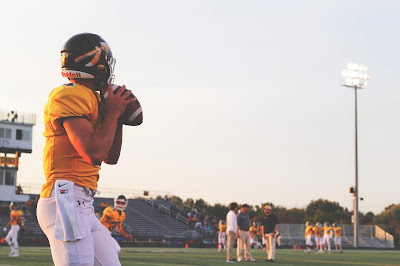 Have you got your fingers crossed that you'll win your office Super Bowl pool this Sunday? You may be thinking that this type of pool is the same as the one you swim in (after all, it's like a big container that stuff is put in), but in fact it's a totally different word.

The gambling pool possibly comes from the French word poule (chicken). One of its slang meanings was "plunder" -- images of soldiers carting off chickens after sacking a village spring to mind.

This came to mean the collective stakes in a card game that the winner takes like the victor's spoils of war. Then all kinds of groupings came to be known as “pools”: for gambling, as in office pools, and not for gambling, as in car pools, although sometimes those might be a gamble, depending on the drivers involved!

The other "pool" has designated a small body of water since Anglo-Saxon times.


Photo by Riley McCullough on Unsplash