When your surname is your destiny 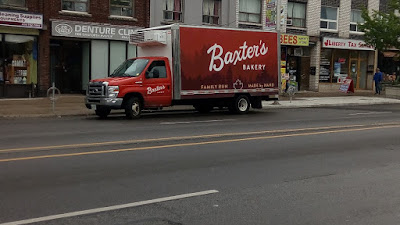 I caught sight of this baker's delivery van as I was on my way to the subway the other day and thought, "Wow, how appropriate is that?" "Baxter" is an occupational name derived from the Anglo-Saxon word bæcestre meaning "a female baker".


In Anglo-Saxon, most masculine agent nouns (nouns denoting someone or something that performs the action of a verb) had an -ere ending, which has evolved into our -er suffix. Feminine agent nouns, on the other hand, had an -estre ending. Thus,
a woman who sang was a
sangestre
a woman who sewed was a
séamestre
I particularly love, and feel we should revive, the word for a female dancer: a
hoppestre
Anglo-Saxon apparently also felt the need for a word meaning "female poisoner or witch":
lybbestre
Most of these have died out, but some have survived as surnames, because they were common occupations, and ones typically filled by women in Anglo-Saxon times.
Thus we have
Webster (a weaver)
Brewster (a brewer)
Dexter (a dyer)
and the above-mentioned
Baxter (a baker)

In the north of England, though, men started taking over trades like weaving, baking, and tailoring, and the -ster ending started to be used in a gender-neutral way. Thus we see a "person who judges", based on the Anglo-Saxon word "deem"  (overtaken by the French word "judge"), is a
Dempster (a judge)
One -ster word that has, just barely, survived, is
spinster (originally "a woman who spins")
but not as a family name for obvious reasons, once it came to mean "an unmarried woman". We won't be sad to see that one go.

Once -ster had become a gender-neutral ending, though, the language still felt the need for a specifically feminine ending, and fortunately the French had brought one with them: -ess, derived from Latin -issa. In our lovely "let's have a language mishmash" way, we just tacked that on and ended up transforming

séamestre into "seamstress" (with its now obsolete variant "sempstress")

By the 16th century all associations of -ster with feminine gender had been lost, paving the way for


gamester, jokester, punster, trickster
and even words formed from adjectives, as in
youngster
and the more recent
oldster

Although I might qualify as both a spinster and an oldster, I would warn you not to use those words of me in my presence!
Posted by Katherine Barber at 10:03:00 AM 3 comments: