This coming Monday is Canada Day, traditionally a time for outdoor eating, much to the enjoyment of ants and sparrows who can scarf down the attendant crumbs.

"Crumb" has meant a small piece of bread since Anglo-Saxon times, but the interesting question is, why is it spelled with a silent b?

Until the 1500s, in fact, there was no b; the word was just "crum" or "cromme". Even Samuel Johnson gives "crum" as the first spelling in his 1755 dictionary.

What happened was that "crum" created a  derivative, "crummel", which then began to be pronounced "crumble" by analogy with words like "humble". This was a very common phonetic transformation; it happened also with "bramble" and "mumble", among others. Then the derivative influenced the root word, at least in spelling, though never in pronunciation.  Helped along by similar words like "lamb" (for the explanation of its silent "b", see this post), "comb", and "dumb", whose history was different, "crumb" actually beat out "crum", its final victory happening in the 19th century.

An interesting semantic development of the word "crumb" is "crumby" (also spelled "crummy", reflecting the earlier spelling of the root word). Why does "crummy" mean "of poor quality"?

In the 19th century, "crumb" started being used to mean "louse", and "crumby" meant "louse-infested". Just as we also use "lousy" to mean "inferior", "crumby" also took on this extended meaning.

Cat word of the month: Marmalade

Continuing on in our "Cat word of the month" series, we now look at "marmalade". (For "tabby", see this post.)

Marmalade was originally a solid jelly dessert made of quince puree, rather than a citrus fruit jam as we now know it.  The word came into English in the late 1400s via French from Portuguese marmelada, a derivative of marmelo ‘quince’. The Portuguese word came ultimately from melímēlon, a Greek term, meaning literally ‘honey-apple’, which was applied to the fruit of an apple tree grafted on to a quince

For the first couple of centuries of the word's existence in English, it continued to be quince jam, but then a wide variety of fruit started to be used: plums, damsons, and even strawberries, dates, and carrots, but still no citrus fruit. This is still seen in other European languages, such as German, where "Marmelade" simply means "jam". Citrus fruit, and particularly oranges, became the default ingredient in "marmalade" only in the 1800s, but it then took over the English breakfast table with a vengeance. By the 1920s people began to see a connection between orange-peel-flecked preserves and striped orange cats.

There is a folk etymology about "marmalade". The story goes that Mary, Queen of Scots fell ill and was served the delectable quince dessert to fortify her. As a result it was dubbed "Marie malade" ("sick Mary"). The less said about this fanciful folk etymology the better!

Did you know that almost all orange cats are male? Thus one often hears them referred to as "ginger toms". Next up in our "cat word of the month" series: ginger.

In June many students receive their diploma, a word ultimately derived from a Greek word meaning “doubling”, which was used for a paper folded in half. By the time it came into English in the 1600s, it was being used for official documents conferring a privilege. Diplomats are called that because originally they had one of these “diplomas” conferring official status on them. But very soon thereafter, “diploma” came to mean a document conferring a degree.
Posted by Katherine Barber at 5:00:00 AM 3 comments:

Of Basil and Basilisks

Summer is here and we are all relishing the fresh herbs in our gardens, among them basil. Why is basil called that? And what's the correct way to pronounce it?


In ancient Greek, the word basileús  meant ‘king’. Legend has it that this fragrant member of the mint family had magical curative properties and was used in special ointments that were for the exclusive use of royalty. Thus, it was called basilikón,  literally the royal herb.
The Romans ascribed even more magical properties to the herb, claiming that it could be used as an antidote for the venom of the similarly named basilisk.

(The basilisk, as you can see from this picture, had a crown on its head, hence its kingly name).

This particular drug claim was conveniently difficult to disprove, since the basilisk didn't actually exist. It was a mythical creature (I bet you never guessed that from the picture), alleged to be hatched by a serpent from a cock's egg (just take a moment to think about that!).  It was reputed to be able to drive away all other serpents, and its breath, and even its glare, could kill. It is possible that the real-world origin of this myth was the Egyptian cobra.

The Romans were so convinced of the relationship between the herb and the serpent that they conflated their names into one: basiliscus.  In French, this is still the case, with basilic serving for both.

Before we leave basilisks (which have recently been more in the limelight thanks to playing a role in the Harry Potter books) and move on to basil, as the English language did, you should know that there is an actual lizard called a basilisk. Found in North and South America, it was named after the legendary basilisk because it too has a crown-like crest. Here is some fascinating and cute basilisk trivia, courtesy of the Encyclopedia Britannica: "Basilisks commonly live along streams and will run quickly across the water on their hind legs when frightened. They are commonly called “Jesus Christ” lizards because of this trait." 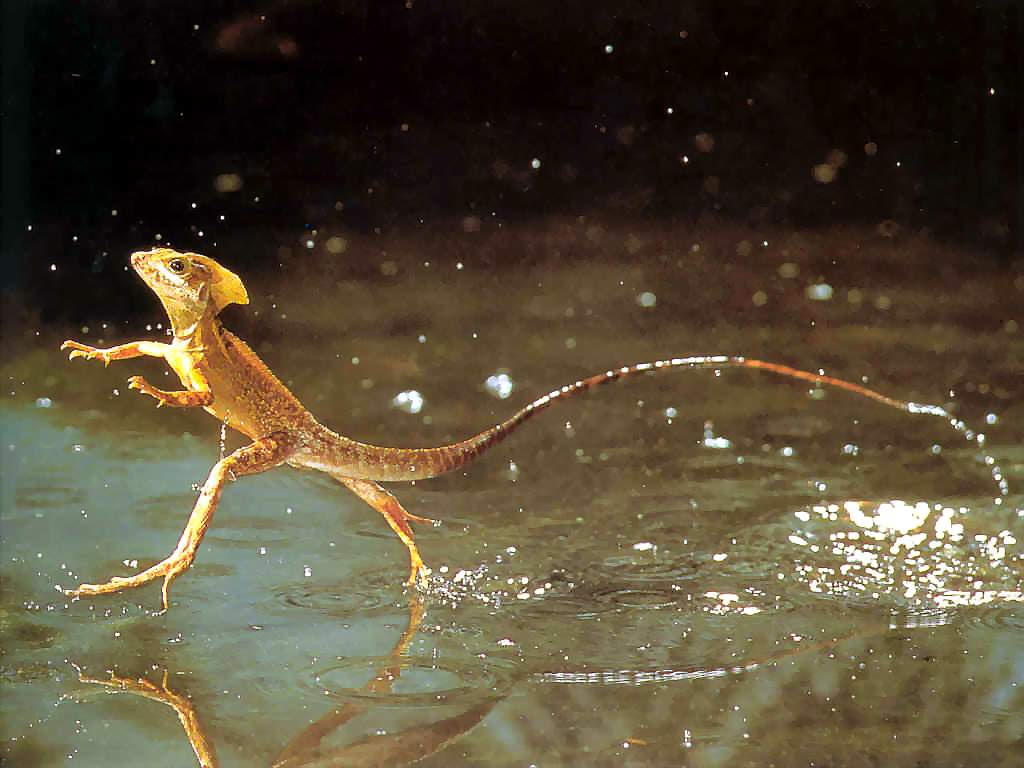 By the late 1400s, the English had learned about basil, as about so many things culinary, from their French masters. They still associated it with nasty reptiles, though they seemed to be unsure whether it combatted them:

1589   T. Cogan Hauen of Health (new ed.) xxxvi. 50   A certaine Italian, by often smelling to Basill, hadde a Scorpion bredde in his braine.

Clearly they were already aware of the Italian fondness for basil, which accounts for a resurgence in the herb's popularity in the 20th century. It had rather fallen out of favour as a culinary herb in England, and Keats's poem ‘Isabella, or the pot of basil’ (1820), in which a young woman hides the head of her lover (murdered by her brothers) in a planter and then grows some basil in it, probably did nothing to make it more appetizing. If that doesn't put you off  your pesto, I don't know what will.

In case you're thinking this might be the origin of the personal name "Basil", it's not (the guy in the planter was called Lorenzo). Like the plant (and also both the word "basilica", originally a royal palace, and the name of the Swiss city Basel), Basil is derived from the Greek Basileios ‘royal’ (a derivative of basileus ‘king’). It became a popular name thanks to the fourth-century bishop St Basil the Great, a theologian considered to be one of the Fathers of the Eastern Church. In North America, it hasn't been in the top 1000 baby names in the past fifty years. In Britain, it was in the top 100 in the Victorian era and even up to 1994, but has since disappeared from view. Personally I can't imagine, as my mother would say, "looking at a baby and calling it Basil".


The thorny question is: how should "basil" be pronounced? The British say "BAZZ'll", while Americans more commonly say "BAYZ'll". A recent facebook poll I conducted confirmed that, as so often, Canadians are divided, with about 75% saying BAZZ'll and 25% saying BAYZ'll. Neither is wrong. If you want to join your voice to the poll, you can find it here.  I have not been able to determine when or why the BAYZ'll pronunciation arose.

For the American/British difference in the pronunciation of the word "herb", see my post "Herb or Erb?" .

Apparently no one pronounces the personal name anything but BAZZLE, which of course brings us to  this classic excerpt from Fawlty Towers, in which a rat called Basil wreaks havoc in a hotel whose owner is also called Basil. No discussion of basil could be complete without it. I wouldn't be surprised if John Cleese -- or BAZZill, as Sybil Fawlty calls him -- single-handedly accounts for the precipitous decline in the popularity of Basil as a baby name.

Place a large (17 x11") baking sheet upside down on middle rack of oven and preheat oven to 425 F. Brush another large baking sheet with olive oil.
If you have a food processor with an adjustable slicing blade, set it to fairly thick and slice mushrooms, zucchini (quarter it lengthwise first), peppers and onion. Chop garlic finely. Spread all vegetables over baking sheet, sprinkle with seasonings and vinegar, and toss to combine well. Spread vegetables evenly on baking sheet, place it on top of the upside-down baking sheet in the oven and roast the veggies for about 30 minutes, tossing a couple of times, until tender and starting to brown.
Meanwhile, whirl dry ingredients for the crust in food processor using blade attachment (it doesn't matter if there are still bits of vegetable in the bowl). Add milk and oil and process until combined. Turn out onto a floured board, knead a few times until smooth, then roll or pat out to a rough circle about 12'' in diameter. Place on another baking sheet. Fold about 1/2 inch of the edge toward the centre and pinch into a raised border.
Spread roasted vegetables evenly over crust to rim. Sprinkle with cheese.
Place in oven on top of the upside down baking sheet and bake for about 20 minutes.
Makes 4 servings, about 400 calories per serving.

PS I do not know what purpose the upside-down baking sheet serves but that's what the original recipe specified.
Posted by Katherine Barber at 5:00:00 AM 5 comments: