The masked bandits we love to hate

"he who knocks over the garbage cans at night".

Of course, I jest. We do not know where the Virginia Algonquians got their name for the animal -- raugroughcun or arocoun -- from. But I bet the raccoons were as busy with the Algonquians' refuse piles as they are with our green bins in Toronto, so who knows!

Toronto has a love-hate relationship with raccoons (the spelling with a double c is more common than the alternative "racoon"): they're pesky, destructive, dirty, and intrusive, but they are pretty darn cute, and one has to admire their agility, intelligence and boldness.

Here's a young family deciding they want to redecorate their home with some patio cushions from Chateau Wordlady:

Meanwhile, the city of Toronto adopted this graphic this summer: 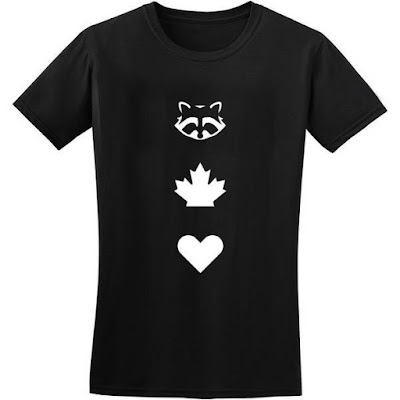 In the last decade we even have cute nicknames for them: "trash panda", and "trash bandit". Although the former does not seem to have been invented in Canada, it seems we use it more than other varieties of the language.

TORONTO -Conrad the raccoon is back, sculpted into a slab of butter at Toronto's Canadian National Exhibition.
The furry critter whose demise on a downtown street in July brought Torontonians together in grief and giggles is now being memorialized by a sculptor.
Every year, the CNE -- fondly known as "the Ex" to local residents -- invites local artists to create butter sculptures in a refrigerated, glass-enclosed space as visitors watch.This year, a buttery duplication of a dead Conrad, lying flat on his back in the middle of makeshift shrine, has become a social media sensation.
The creation even features butter roses situated around him and a framed butter portrait of the waving, grinning raccoon in happier times.
Earlier this summer, a group of Torontonians who noticed the dead raccoon created the shrine to the animal in the hours it took for municipal animal control workers to show up and dispose of his corpse.
"A fitting tribute to a wonderful trash panda ... this gives me closure," wrote someone on the Toronto Reddit page.


If you would like to learn more about the fascinating story of the English language, there are still a few spots available in my course starting October 13. More info here:


Tea and Wordlady returns!
English Schminglish: How Hebrew and Yiddish have contributed to our language.
Sunday 29 October, 430 pm,

An entertaining illustrated talk about how
Hebrew and Yiddish words have enriched English
and continue to do so.

Space is limited to only 24

To register for a "Tea and Wordlady" event, please
1) send me an email (wordlady.barber@gmail.com)
to say that you are coming
2) send a cheque for $50 per person (includes tax) made out to Katherine Barber at
201 Hanson St, Toronto M4C 1A7.
If you use online banking, you can also do an Interac e-transfer.
3) On receipt of your payment I will email you your ticket(s)

Well, DUH! you may think.

In Canadian English "dangerous offender" is a legal term with a specific meaning (not just an offender who happens to be dangerous):


a person who has been convicted of a serious personal injury offence and constitutes a threat to the life, safety, or physical or mental well-being of others, and whose history suggests little hope of reform, who is imprisoned indefinitely.

This classification has existed since the late 1960s in Canada.

A recent headline in The Globe and Mail would no doubt cause some puzzlement to non-Canadians:


Saskatchewan man who beat woman, set her on fire not dangerous offender: judge

In fact the decision in this gruesome case probably also caused some puzzlement to many Canadians, but not so much of the linguistic kind.

Since 2003, British law has also had a "dangerous offender" classification, with a somewhat different definition:


dangerous offenders will be given an extended sentence of imprisonment, which is a determinate sentence of which the defendant must serve at least half. The defendant may be released during the second half of the sentence, providing he receives a positive recommendation from the Parole Board. In addition to the extended sentence provisions under the Act, dangerous offenders must also receive extended supervision periods of up to five years for nonviolent offenders and up to eight years for violent offenders.

Would you like to know more about the history of the English language (including the particularities of Canadian English)? If you live in the Greater Toronto area, sign up for my fun course this fall:
http://katherinebarber.blogspot.ca/2017/07/history-of-english-language-course-this.html

To have fun facts about English delivered weekly right to your inbox, click here to subscribe by email.


Did you know Wordlady is available as an expert witness for trademark litigation? If my expertise can help you, please get in touch at wordlady.barber@gmail.com

English Schminglish: How Jews have Enriched our Language”