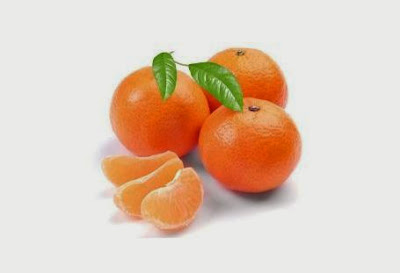 I love this time of year, when the first crates of the aptly named Citrus nobilis var. deliciosa arrive in the grocery stores. Yum. How did this easy-peel, seedless cross between a Mediterranean mandarin (tangerine) and a sweet orange come by its more common name: clementine?

We owe it to a French priest, Father Clément Rodier, who first cultivated the hybrid, accidentally, it seems, in 1902 near Oran, Algeria.

This has absolutely nothing to do with the heroine -- daughter of a "miner, forty-niner" -- of the famous ballad dating from the 1880s. Her name, a feminine form of the French Clément, was fairly popular in the US in  the 19th century but slid progressively out of fashion in the 20th, finally disappearing off the charts in the fifties. Although her name is unambiguously pronounced to rhyme with "tine", the fruit can rhyme with "tine" or "teen". I myself say "teen", mostly because I first encountered the fruit in France, but, as a result, I have been roundly teased by other Canadians (for whom "tine" seems to be the overwhelming favourite) for being pretentious. What do you say? (That is, "How do you pronounce this?", not "Am I pretentious?")

Most of our clementines in Canada come from Morocco, and their older cousins the tangerines have a connection with the same country, for they are named after the Moroccan port of Tangier.

Both are subcategories of the mandarin orange, of Chinese origin, which is possibly so-called in reference to the rich yellow colour of the robes of the upper echelon bureaucrats in the imperial Chinese civil service.

Silent letters in English: The Series

One of the numerous things that bedevil English spelling are the many silent letters we have in our words.

I have already addressed a number of them in other posts:

the p in ptarmigan

the h in heir, honest, honour, hour and (for some people) herb

the b in crumb

the b in lamb, comb, and dumb

the (for some people) first r in February

the g in reign

the c in muscle

the (for most people) first d in Wednesday

the l in almond, calm, psalm, and palm

the l in salmon

the p in psalm

the s in island and isle


Clearly, there are so many I can't deal with them all in one post, and there are still more, so we should now consider this a series.

The latest installment is inspired by a kindergarten teacher neighbour of mine who relayed a question from her students (out of the mouths of babes, as they say): Why is there an "l" in "could"?

As irregular verbs go, this one takes the cake. Quick, what's the infinitive of "can"?

Sheesh. It's from a different language altogether, "able" being a word of French origin, and "can" being Anglo-Saxon.

Of course, in Anglo-Saxon, there was an infinitive, cunnan, whose relationship with "can" was much more obvious. Cunnan, however,  meant "to know" (it is the source of our word "cunning").  It was only by the 1300s that its meaning had slid from "to know" through "know how to do something" to "be able to do something".

The past tense of cunnan was cuth, spelled couth by the French scribes who meddled with English spelling after the Norman conquest. You will have guessed that it is the source of our word "uncouth", which slid from "unknown, unfamiliar" to "strange" to "distasteful, unpleasant" to "clumsy, awkward", finally landing in "uncultured" by the 1700s.

"Couth", meanwhile, as the past tense of "can", gradually saw its -th ending replaced in both speech and spelling by a -d, so that by the 1500s it was spelled "coud". Unfortunately for it, this meant that it now rhymed with a couple of other auxiliaries, "should", and "would".  These came by the "l" in their spelling honestly, "should" being a form of "shall" and "would" being a form of "will". But by the 1500s their "l" was no longer pronounced.

Instead of doing the sensible thing and dropping the "l" out of "would" and "should", we did the English thing and, by analogy, inserted a perfectly unjustified one into "coud".

Good luck to the kindergarten teacher in explaining this one. No wonder teachers have to resort to "just because" so much!

Email ThisBlogThis!Share to TwitterShare to FacebookShare to Pinterest
Labels: could, couth, cunning, English spelling, should, silent letters, uncouth, would

The power of acronyms

Hmmm, what could that mean? Let me consult a dictionary. Oh, here it is.

Bachelor of Divinity and Stipendiary Magistrate (in New Zealand).

Sounds eminently respectable. Certainly no one should be fired for being a Kiwi theologian judge in their private life. And look, apparently there's a whole "community" (what a cozy word that is) of them out there.

"No, Katherine," you say, "you lexicographers don't get out enough."

This acronym has been much in the news here in Canada since disgraced CBC radio host Jian Ghomeshi used it in his facebook apologia for his sexual practices, which have precipitated a full-blown Canadian sex scandal (to paraphrase The Beatles, these are words that don't go together well).

My advice to you is: when people resort to alphabet soup, they are often aiming at obfuscation or trying to pull the wool over your eyes. And you should resort to a snappy initialism of your own.


After our recent municipal elections, a friend posted this picture to facebook,
commenting, as a fan of Plain English, that  the unambiguous wording "voting place" was much better than the more traditional "polling station". Polling stations are more commonly "polling places" in the US, but the latter term was also used in Scotland's recent referendum. Incidentally, I noticed on all similar pictures in Google Images of Ottawa signs that they were affixed with the same blue tape, which makes me wonder whether democracy in Ottawa is being held together by duct tape, but I digress.

It's "polling" that's the issue. Since the word "poll" took on the meaning "conduct an opinion survey" in the early 20th century, that has become by far its most common meaning. The "record votes in an election" sense has been replaced altogether, surviving only in these compounds, "polling station" and "polling place". So there is an argument to be made that "polling station" is now misleading, or at least not helpful, especially in a society like Canada's where English is a second language for many.

"Voting place" seems to be catching on in official communications from the elections authorites (though Elections Canada still seems to prefer "polling station"). However, in newspapers, the favoured word is still overwhelmingly "polling station", by a factor of 10 to 1.

Here in Toronto, whatever we call our venues, our signs went for a very efficient, space-saving, bald command (or maybe, in view of the ghastly four years of municipal politics we've just endured, it was a plea?): 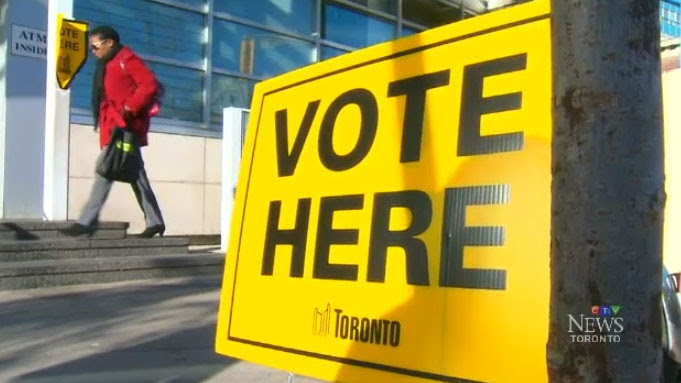 I wonder if anyone has done a study on whether a verb lures more people to vote than a noun does. I know there have been studies showing that using the word "please" persuades people to act, so maybe in future our signs should say "Please vote here".

Where did "poll" and "vote" come from?


"Poll" arose in the  13th century, possibly borrowed from Dutch pol (top, summit), and originally meant "the part of the head on which the hair grows, the top of the head". It soon came to be used as a verb meaning "shave the hair on the head" and, after a couple of centuries, this verb was being used to mean "establish a head count" (a much more recent expression dating from the early 1900s). By the 1600s, "poll" was being used to mean "count votes" and, later "cast or record a vote".

"Vote" comes from the Latin vōtum (vow, wish), a past participle of vovēre (to vow, desire). Like many words borrowed from Latin, it came into English at the Renaissance, but was used only by the Scots until the 17th century.

So, if it hadn't been for the Scots, those Toronto signs would say "POLL HERE".