A soothing tombstone for your throat

Faithful Wordlady readers will know that I sing in a choir. At least, I do when not being asphyxiated by incense or rendered mute by some nasty laryngitis-inflicting virus. With this being Holy Week, it's a major singathon for church choristers, and, not surprisingly, there's usually a stash of throat lozenges somewhere in the choir room. But why are these soothing candies called that?
A lozenge was originally a diamond-shaped figure in heraldry.

Since heraldry was a preoccupation of the French-speaking aristocracy rather than of the Anglo-Saxon lower classes in medieval England, this is yet another word that we acquired from French.
There are two theories as to where the French got it. It may have come from a Provençal word lausa derived from Latin lapis (stone). In some Romance languages this derivative meant "roofing slate" or "slab" or, more ominously considering what lozenges are used for today, "tombstone".  A second possibility is that it goes back to a word in Pahlavi  (a Persian language), lawz (almond), because an almond is shaped like a diamond.
The reason we now use the word for a type of cough drop is that in the 1500s, medicated pills were made in a diamond shape. Eventually, the idea of the medication it contained became more important than the shape of the pill, so now we have round lozenges as well as quadrilateral ones.
For the origin of the word "Easter", please see this post.
Posted by Katherine Barber at 5:00:00 AM No comments:

Does Palm Sunday have something to do with hands?

This coming Sunday is Palm Sunday, on which Christians commemorate the triumphant entry of Jesus into Jerusalem, with the crowds lining his way with palm branches, which in the ancient world were given to winners of great victories. Are palm trees and the palm of the hand related?

Surprisingly, yes. The Romans presumably saw a similarity between the leaves of the tree and a hand with outstretched fingers, and thus named the one after the other (no word, though, on whether the Romans had more fingers on their hands than we do!). 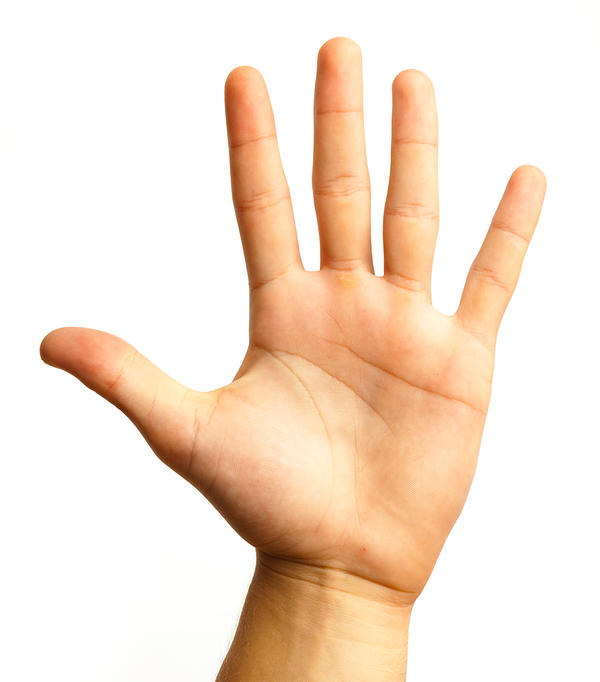 When people are trapped next to a one-sided conversation — known nowadays as a “halfalogue” — their anger rises in the same way it does in other situations where they are not free to leave, like waiting for a train.

This word was apparently coined in 2010 in an article in Psychological Science journal:
http://www.psychologicalscience.org/index.php/news/releases/halfalogue-overheard-cell-phone-conversations-are-not-only-annoying-but-reduce-our-attention-html.html
Posted by Katherine Barber at 10:58:00 AM No comments:

"Everyone has always regarded any usage but his own as either barbarous or pedantic."
Posted by Katherine Barber at 7:00:00 AM No comments:

Of matters papal. Or is it popal?

Continuing on in the clerical vein of last week's post about cardinals (I promise I will get less churchy soon), we answer two burning questions.

One might be tempted to answer, "Because English is ANNOYING!".

So the real question is: why is it "pope" instead of "pape"?

In ancient Greek, papa was a child's word for "daddy". As we do with father in English, this word was used to address priests. In Hellenistic Greek and Byzantine Greek the word (now papas) was applied to bishops. Latin speakers did the same with their version, papa. By the early 4th century it was being applied especially to the Bishop of Rome, who, by 1073, claimed it as his and his alone.

This was one of the rare words (almost all of them religious terms) borrowed by Anglo-Saxon from Latin after the Anglo-Saxons converted to Christianity. Similarly to other European languages, it was pape in Old English, and is in fact that to this day to some speakers of Scottish English.

But in the SE Midland dialect of English, which went on to dominate English, there were a series of vowel shifts that resulted in pape (originally pronounced PAHpuh) ending up as "pope" by the end of the Middle Ages.  The same thing happened with the word "rope" (originally rap in Anglo-Saxon).

But the related adjectives and nouns were not borrowed into Anglo-Saxon at the same time as the base word. They were borrowed directly from the French or Latin words with their central "a" vowel at the end of the Middle Ages. At this point this particular a-to-o shift had already happened in English and would not happen to any words acquired subsequently.
So "papal" and company remained stuck with their "a",...
while "pope" stuck with its recently acquired "o",...
and we are all stuck with another inconsistency in English.

In ancient Rome, a high priest was known as a pontifex,and the Christian Church took over this name for the Bishop of Rome in the Middle Ages, eventually evolving into "pontiff" in English. Traditional etymologies have held for centuries that the word is literally a maker (-fex) of a bridge (pons, ponti-), presumably between the people and the deity, but this may well be nothing but a folk etymology.

Surprisingly, the verb "pontificate", in addition to its more common disparaging meaning "speak in a pompous or dogmatic manner", has a literal sense, "celebrate a solemn High Mass": " Pope Paul is coming to address the United Nations and pontificate a Mass at Yankee Stadium."

Email ThisBlogThis!Share to TwitterShare to FacebookShare to Pinterest
Labels: origin of pope, why called pope

Why are cardinals called cardinals? 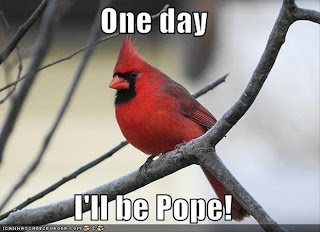 Cardinals (not the ornithological kind) are much in the news these days. But why are they called cardinals?


The Latin word for "hinge" was  cardo, with its accusative case being cardinem. From this derived an adjective describing hinge-related things, cardinālis. The fixed hinge around which things turn is of necessity, very important -- that's why we use the phrase "to hinge upon something" -- so cardinālis took on the meaning "fundamental, principal, of chief importance".

Some of the things the Romans described as "cardinal" were the winds from the four compass points and cardinal numbers.

But very early on in church history, particularly important priests in the hierararchy were also described with the adjective "cardinal", which subsequently became a noun.

The Catholic Church also used the adjective "cardinal" to designate the most important virtues (in scholastic philosophy, justice, prudence, temperance, and fortitude,considered  the four chief ‘natural’ virtues as distinguished from the ‘theological’ virtues of faith, hope, and charity).

To balance the virtues there are of course the seven deadly sins, and these came to be known as cardinal sins. Entertainingly, the chief Catholic archbishop in the Philippines a while ago had the infelicitous name Cardinal Sin.
Why do cardinals wear red? In the 13th century Pope Innocent IV granted them the privilege of wearing a red hat. Subsequently, no doubt, they wanted a matching ensemble. Scarlet is the traditional colour for church vestments worn on martyrs' feast days, to commemorate the shedding of their blood for the church, and has the same symbolic meaning in the attire of cardinals, who are meant to be willing to give of themselves for the Church, even to the point of martyrdom.

When the English started settling in the Carolinas in the 1700s and saw the brilliant scarlet plumage of the native bird, they instantly saw a resemblance to a cardinal's clothing and named the bird accordingly.

And speaking of feathered things, there is apparently a French proverb, particularly apposite at the moment, which translates as "He who enters the conclave as Pope leaves it as a cardinal", in other words, the guy who seems to be the frontrunner in the election turns out to be a loser, or, by extension, don't count your chickens -- or your cardinals -- till they're hatched.

To find out why the adjective is "papal" though the noun is "pope", click here.

An entertaining look at some of the hot usage issues of 1856 is to be found on the "Bridging the Unbridgeable" blog.
an example:
No. 23. “I prefer the yolk of an egg to the white:” the more common word is yelk, with the l sounded; but if yolk be used, it should be pronounced like yoke.
Posted by Katherine Barber at 4:56:00 AM No comments:

We recently witnessed a particularly spectacular and dramatic visitation of a meteor. The media needed experts to comment, so naturally they contacted some... meteorologists.

Of course they didn't.

Meteorologists don't study meteors. They study the weather. But surely they should study meteors? Why don't they? Why is this word so perverse?

The explanation is that the word "meteor" originally covered a lot more territory than it does today. It comes from an ancient Greek word meteoros  (raised, lofty), and came to apply to almost all phenomena happening "up there" in the sky.

Gradually, however, in common usage "meteor" came to be used of only the last mentioned of the "fiery meteors": the shooting star.  Like the aurora, meteors came to be recognized as an astronomical rather than a weather phenomenon, so they were no longer studied by the weather specialists.

But the weather specialists clung on to their original name, literally the "upthere studiers", and that is why they are meteorologists but don't study meteors.