Tomorrow night many of us will be toasting the new year. Oddly enough, this does have something to do with what we eat for breakfast. “Toast” started out in the 1300s meaning, roughly, “suntan”, derived from a Latin word tostare. The “grilled bread” sense cropped up in the 1400s, but at the time “toast” was a piece of bread coated with sugar and spices, grilled, and then dropped into a glass of wine to flavour it. In about 1700, it became popular to mention a lady's name when inviting people to drink, the idea being that thinking of the lady added a special savour to the wine, just as the sweet spicy crouton did.
Posted by Katherine Barber at 12:13:00 AM 3 comments:

Of Sugarplums and Plum Pudding

One of the weird things about Christmas is that plums seem to be everywhere but are in fact nowhere. Many of us are preparing our plum puddings for Christmas dinner, and of course, on Christmas Eve visions of sugarplums will be dancing in our heads. Meanwhile, the Sugar Plum Fairy is literally dancing, as ballet companies perform endless Nutcrackers. But none of these things has anything to do with actual plums. What gives? 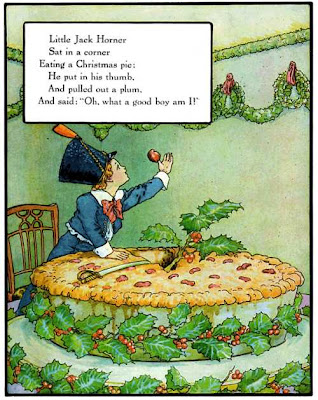 The person who first recounted the deathless tale of Little Jack Horner and his Christmas (i.e. mincemeat) pie would still be trying to think of a body part rhyming with "raisin" were it not for a fortunate (for him) development in both English cuisine and usage in the 1600s. Certain dishes, for instance mincemeat and Christmas pudding, which had originally been made with prunes (dried plums), started to use raisins or currants instead, but the word "plum" continued to be used despite the change in the type of fruit. So what Little Jack's thumb encountered was actually a dried grape, just like the ingredients in your "plum" pudding.

Sugarplums, on the other hand, were never plums, not even candied ones. They were a kind of hard candy, about the size and shape of a plum, in various colours and flavours, often with wire "stems" attached.  An aniseed or caraway seed served as a "pit". Sugarplums were in vogue from the seventeenth to the nineteenth centuries, just in time for Tchaikovsky and the choreographers Petipa and Ivanov to ensure their immortality by associating them with the reigning deity of the Land of the Sweets, performed here by the very lovely Miyako Yoshida of Birmingham Royal Ballet:

A very merry Christmas to all Wordlady readers; thank you for following. I hope you have many sugarplums over the holidays... and if you've never been to see Nutcracker... go!
You can catch the Royal Ballet's beautiful classic version in cinemas around the world this week. Check out locations near you here: http://ca.rohcinema.com/tickets 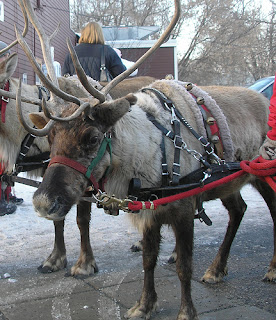 With visions of Donner and Blitzen and Co. harnessed up to Santa's sleigh in our heads, one might think that reindeer are so called because they wear reins. But the reins used for horses are from the Latin word retinere (hold back), whereas “reindeer” comes from the language of the Vikings (not surprisingly, since reindeer are found in the northern parts of the world). In Old Norse, rein was the word for what we would call a caribou. “Deer” back then was the general word for animals, only later being restricted to the antler-bearing ones. So, etymologically speaking, “reindeer” means “caribou animal”. "Caribou", by the way, has a very cute etymology, coming from a Mi'kmaq (native people of eastern Canada) word meaning "snow shoveller", from their habit of scraping away snow with their hooves to get at the food underneath.

Neither "rein" nor "reindeer" has anything to do with the other "reign". Or "rain", for that matter, but I doubt anyone makes that mistake. (Coincidentally, though, "rain" did also start out life with a "g"!)

"Reign" comes from the Latin regnum (government by a king) via Old French. Various pronunciations of the word seem to have existed throughout the Middle Ages -- rayn, ray-nye, rayng-nye -- but eventually "rayn" won out. Being English, though, we wouldn't waste the opportunity to bedevil people learning to spell when we could keep a good silent letter to show off that we know the Latin origins of a word. So we're stuck with the g. I guess we should just be grateful that no one felt compelled to reflect the Latin origins of "rein" by spelling it "reitn"!
Posted by Katherine Barber at 6:07:00 AM 2 comments:

Email ThisBlogThis!Share to TwitterShare to FacebookShare to Pinterest
Labels: homophones

Sorry, I CAN'T get it for you wholesale

It is the busiest retail season of the year. “Retail” comes from the Old French verb retaillier (cut again). The literal idea was that the merchant would get a huge hunk of cheese or something else whole (hence “wholesale”), then cut smaller bits off it to sell retail. The root word in retaillier (from the Latin talea, a cut stick) is also found in the word “tailor”, literally a cutter of clothes, and in “tally”, originally a stick with notches cut into it to record the amount of a debt or payment.
Posted by Katherine Barber at 1:02:00 AM 4 comments: 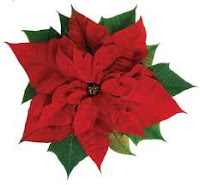 The word "poinsettia" is a spelling trap for the unwary, especially as most of us pronounce it "poinSETTA" (or in fact, in North America, "poinSEDDA"). But don't forget it has that -ia ending so common in plant names: dahlia, petunia, gardenia etc.

Not to mention "fuchsia", where we don't pronounce the ending ee-ah either, though one irate correspondent to the dictionary berated me for giving the pronunciation as "FYOOSHA" instead of what she considered the "correct" pronunciation: FOOKseeah (FOOK rhyming with BOOK). I was sorely tempted to write back saying that I would never do anything that would lead some poor innocent to engage in a conversation at a garden centre starting with the statement, "I wanna FOOKSya"!

You might also be tempted to add a superfluous "t" to poinsettia: pointsettia, but the flower is named after J.R. Poinsett, the first US Minister to Mexico and an amateur botanist, who came across the flower while there in the 1830s. Poinsettias are pointless, you might say (I've never been a fan of them).

Wondering what to give your word-loving friends and relations? Six Words You Never Knew Had Something to do with Pigs and Only in Canada, You Say  make great gifts, both available from amazon.ca. Click here to order.
Posted by Katherine Barber at 3:52:00 AM 3 comments:

Email ThisBlogThis!Share to TwitterShare to FacebookShare to Pinterest
Labels: pronunciation

It's winter, and many of us are sneezing (especially if we didn't get our flu vaccine). But until the mid-1400s, people fnesed (this wonderfully evocative word was pronounced “fnayz”). While words starting with fn- became rare, there were many starting with sn-, especially nose-related ones like “snivel”, “sniff”, “snort”, and “snot”. Gradually the venerable “fnese”, which dated back to Anglo-Saxon times, was supplanted by “sneeze”.
For the history of the word "flu", click here, and if you're wondering how to make it plural, click here.
Don't forget you can share Wordlady posts with your facebook friends or twitter followers simply by clicking on the "Share this" buttons in the left-hand column!
Posted by Katherine Barber at 4:02:00 AM 2 comments:

Email ThisBlogThis!Share to TwitterShare to FacebookShare to Pinterest
Labels: etymology, word history, word of the week

An instance of homophone confusion

Do not confuse "incidence", "incidents"  and "instance".

Recently I saw the following sentence: " I, and I'm sure plenty of others have seen and heard first-hand incidences of eating disorders".


Incidence is a fancy-schmancy word for "rate": the occurrence, rate, or frequency of a disease, crime, or other undesirable thing. So you could say, "There is a high incidence of anorexia in that group". If you have problems with this, you'd be well advised just to use "rate" instead, and banish "incidence" from your active vocabulary so that you don't confuse it with "instance".

An instance is an example. A single example of something occurring, not the relative rate of its prevalence in a group. "In the course of the year, there were four instances of students with eating disorders."

Another confusion is between "incidence" and "incidents".


An incident is a happening or occurrence, usually an isolated case when something else is going on. The word usually has negative connotations, so if you read, "There was an incident at the ballet last night," you expect it to be that an audience member got up in the middle of the White Swan pas de deux and shouted profanities, not that everyone cheered for 20 minutes of curtain calls.

Email ThisBlogThis!Share to TwitterShare to FacebookShare to Pinterest
Labels: homophones

Flu vaccine clinics are up and running again. Where does the word “vaccination” come from? In 1796, the British scientist Edward Jenner discovered that immunity to smallpox could be achieved by inoculating people with the milder virus of a disease called cowpox. But, being an 18th-century guy, Jenner gave the virus a Latin name: variolae vaccinae, from the Latin for “cow”, vacca. A cowpox shot was called a “vaccine inoculation”, quickly replaced by the snappier “vaccination”, which was subsequently applied to inoculations against any disease, not just smallpox.
For more on whether "flu" can be used in the plural, and if so, what that plural is, visit this post.
Posted by Katherine Barber at 12:03:00 AM No comments: