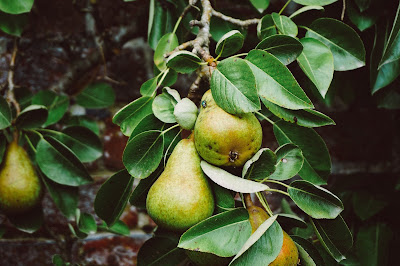 I am starting today a series to keep you entertained during December and early January, looking at each of the gifts mentioned in the well-known "Twelve Days of Christmas" song. And, before you start protesting, yes, I know that the first day is Christmas itself and the last day Epiphany, but I don't delude myself that you would rather be reading daily Wordlady blog posts than having fun with your family over the holidays, so I'm spreading the joy a little bit.

First up: The Partridge.

Inquiring minds will of course want to know....

What does it have to do with farting?

When partridges are scared, they take off with a loud cackle and whirring sound of their wings. For this reason, the ancient Greeks called the bird a perdok, which was related to their verb perdesthai, which meant "to break wind." If you go even further back than Greek, into Indo-European, you find the root perd meaning "to break wind". As we have seen, this migrated down through Greek and Latin and French and English to give us "partridge".

But it also migrated through Germanic into English, undergoing a few consonant and vowel changes to give us the word "fart"!

OK, you are never going to be able to hear this song in the same way again.


Photo by Dan Gold on Unsplash

If you or a friend would be interested in taking my "Rollicking History of English" course in downtown Toronto in the new year, please get in touch (wordlady.barber@gmail.com).

For why we write "twelfth" rather than "twelvth":
http://katherinebarber.blogspot.ca/2015/01/12-days-of-wordlady-twelfth-day.html

For why I'm not the Word Wench:
http://katherinebarber.blogspot.ca/2014/12/12-days-of-wordlady-nine-ladies-dancing.html

For why milkmaids work in a dairy rather than a milkery:
http://katherinebarber.blogspot.ca/2014/12/12-days-of-wordlady-8-maids-milking.html

For what swans have to do with singing, click here:
http://katherinebarber.blogspot.ca/2014/12/12-days-of-wordlady-swans-swimming.html

For why it was OK to call the Virgin Mary a "bird", click here:
http://katherinebarber.blogspot.ca/2014/12/12-days-of-wordlady-calling-birds.html

For what French hens have to do with syphilis, click here:
http://katherinebarber.blogspot.ca/2014/12/12-days-of-wordlady-french-hens.html

P.S. If you find the English language fascinating, you might enjoy regular updates about English usage and word origins from Wordlady. Receive every new post delivered right to your inbox! You can either:
use the subscribe window at the top of this page
(if you are reading this on a mobile device): send me an email at wordlady.barber@gmail.com