One of the reasons English spelling is so difficult is that vowels in unstressed syllables often get reduced in speech to an indeterminate sound (called a schwa). There is nothing wrong with this; it is just the way English is pronounced. But it means that, for instance, the last two syllables in "autonomous" sound exactly the same as the last two in "synonymous", despite their different spelling. Be wary! Don't make the mistake of spelling "synonomous" or "anonomous", etc.

"Synonymous", like "anonymous", "pseudonymous", "eponymous", and a few other words you probably don't use daily (like "pseudeponymous" - falsely named or attributed), includes the Greek word onuma (name), which acquired a y instead of the u in Latin. "Autonomous", on the other hand, comes from the Greek nomos (law).

And then there's the euonymus, a type of bush whose name literally means "well-named" or "lucky" in Greek. 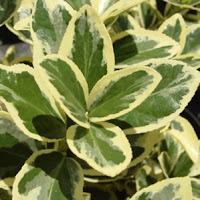 Note that just to make our lives miserable on the spelling front, there is no o in the final syllable for this one, as it is not an adjective but a Latin noun. According to Pliny, the flowering of the euonymus presaged pestilence, and thus its name was either euphemistic or ironic.

As a special treat for you word lovers looking for something with which to impress your friends or win spelling bees, here's that fancy word I used in the title of this post: pseudisodomous. Are you thinking it's something titillating? I bet you are, but don't get too excited: it describes a method of building or type of masonry in ancient Greek architecture in which the courses of blocks were of unequal height, length, or thickness, but the blocks in each course were alike. Riveting, I know. Sorry!
Posted by Katherine Barber at 2:55:00 PM