For fashionistas like me, this is a very important time of year: Milan fashion week.
OK, maybe I'm not a fashionista (I hope those of you who know me have recovered from falling off your chair laughing at the thought) but I do like hats, and over the years have done my bit to enrich the coffers of milliners. Why are hat-makers called this?
In the Middle Ages, Milan was pronounced "MILLIN" in English. I will come back to the current pronunciation of the word later on, but back then, people from Milan were called either Milanese or "Milliners".
Even then Milan was renowned as a fashion centre, and particularly for producing fancy textiles and trim. Milan lace, "Milan bonnets", and other accessories were big items. (For the etymology of the word "bonnet", click here.) By the 1500s, people who sold these fancy wares were being called “milliners”, and since hats are a major accessory, the word became restricted to those who make or sell them.
In looking into this, I was entertained to discover that the tradition of making up etymologies has a long and undistinguished history, as evidenced by this fanciful theory:
1617   J. Minsheu Ὴγεμὼν είς τὰς γλῶσσας: Ductor in Linguas at Habberdasher,   An Habberdasher of small wares... In London also called a Millenier, à Lat: mille, i. a thousand, as one hauing a thousand small wares to sell.
Before milliners, we also had the plain English word "hatter". In fact, Henry VII felt moved to pass a law in 1488 forbidding them to charge more than 20 pence for a hat. But of course, a word evoking chic Italy would be much more desirable in the fashion trade. No word on whether "milliners" got to charge more than "hatters" (I bet they tried!).
The word "hatter" had another strike against it: the phrase "mad as a hatter" ("mad as a milliner" would be so much more alliterative). This arose because of the toxic effects on the brain that hatters suffered from using mercury in the creation of felt hats. Lewis Carroll  riffed on this already existing phrase when he created the character of the Mad Hatter in Alice's Adventures in Wonderland. 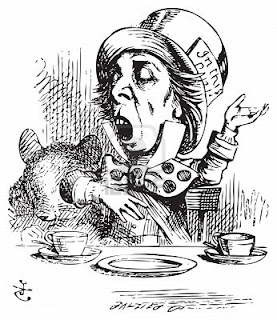 And now, about the pronunciation of Milan, or more specifically the second syllable. The first time I heard someone say "MillAHN", I thought, "Oh how terribly pretentious." (You see, I do have my judgmental moments about the language, but  I slap myself whenever I feel one coming on). You realize that I am strongly in the MillANN camp. This is the only pronunciation in Britain, but it turns out that the AHN version is the more common one in the US. This leads inquiring minds to wonder, as usual: What do Canadians say? Based on a recent facebook poll I conducted (you can add your voice to it by clicking here), ANN is more popular in Canada (60% of respondents vs. 40% for AHN). Since my younger facebook friends tended more towards AHN, however, I suspect that it is becoming more common, no doubt influenced by American pronunciation and the apparent belief that the AH vowel should be used in foreign words.

If you're thinking of going to Milan -- and I recommend it highly, it's a beautiful city -- you might want to check out my travel tips by clicking here.

Speaking of travelling, if you love Jane Austen you might want to think about my "Ballet and Jane Austen" trip to England next February. Email me at toursenlair@gmail.com for details.
Posted by Katherine Barber at 3:30:00 AM