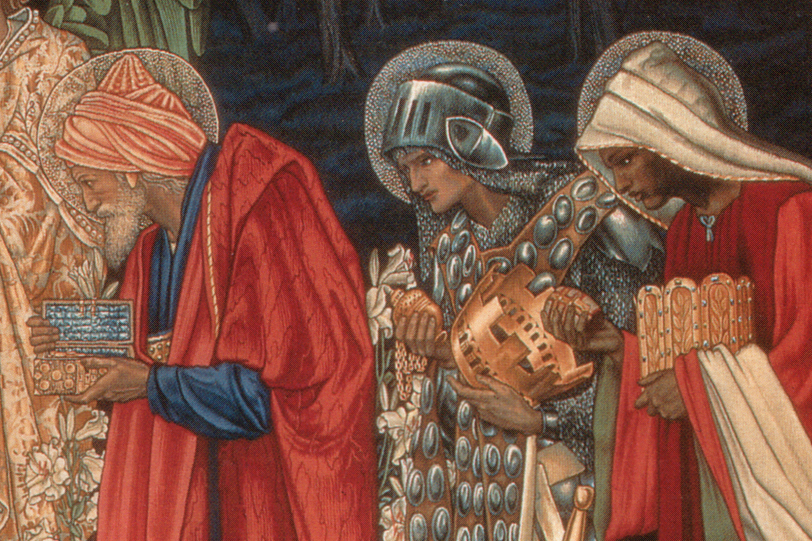 This Sunday is the feast of the Epiphany, celebrating the arrival of the Wise Men bearing gifts of gold, frankincense, and myrrh for the baby Jesus. What the heck is frankincense anyway? Is it any different from the smoky stuff smelling like cat pee on burning tires with which acolytes afflict church choristers on a regular basis? (You'll never have guessed that I'm in the chorister category, right?)

I have been known, getting choked by a mouthful of smoke just as I'm gearing up to unleash one of my dulcet e-flats on the unsuspecting congregation, to get angry.

And in fact, the verb "incense" (to make angry) and the noun "incense" come from the same Latin word, incendĕre (to set on fire). The past participle was incensus,  and its derivative  incensum meant  ‘that which is set on fire’. Since we borrowed the word from the French (for whom incense is encens), the first syllable was en- rather than in- throughout the Middle Ages. But then in the Renaissance it was felt that the spelling should reflect the original Latin word, so it became "incense". At about the same time, we borrowed the verb directly from Latin, originally to mean literally "set on fire" (though limited to poetic usage) and then "inflame with passion" and "inflame with wrath".

But why did the baby Jesus get frankincense instead of plain incense? Well, because He was special. Frankincense was superior quality incense,  the word "frank" having had "high quality" as one of its numerous senses in its fascinating history.

It all started out with a Germanic tribe living in what is now southern Germany. Their weapon of choice was the javelin, called a frankon. They therefore came to be known as Franks. In about 600, they invaded what the Romans had known as Gaul and what we now know, thanks to them, as France. In Frankish Gaul, only the members of the conquering people had full freedom, so "frank" came to mean "free". Originally applied to political freedom, "frank" soon came to be used of freedom from all sorts of constraints, including those on expressing oneself honestly.

Another of these freedoms was freedom from payment, so originally "franking" a letter was writing an official authorization on it so that it would be conveyed without charging. The term was resurrected when the practice of cancelling postage stamps arose,

But, back in the Middle Ages,  "frank" also took on another sense: generous (much as we say someone is "free with their money"). This sense came also to apply to trees that produced abundant and high quality fruit. It is from this branch that "frank" took on the meaning "of superior quality", a meaning that survives today only in "frankincense", which technically is an aromatic gum resin yielded by trees of the genus Boswellia.


Here's a lovely motet for Epiphany by Francis Poulenc:

Seeing the star, the magi rejoiced with great joy;
and entering the house,
they offered the Lord gifts:
gold, frankincense, and myrrh.

Those of you who are into these things will recognize in the Latin word for incense, thus (pronounced TOOSE), the origin of our word for an incense burner, "thurible" (also called a "censer", the French having lopped off the initial syllable en- fairly early on):

and for the person waving it in my face, the "thurifer".

If you live in Toronto and want to hear this motet sung live, along with William Byrd's sublime Mass for Four Voices (not to mention a dose of incense), why not visit St Thomas's Anglican Church on Huron Street south of Bloor (one block west of St George) for the morning service:

By the way, isn't Septuagesima a cool word? More about that in another post.

That's more than enough about incense. You'll have to wait till next year's Epiphany to find out about myrrh.

But did you know that a popular girl's name is also etymologically related to the Epiphany? Click here for more!
Posted by Katherine Barber at 3:43:00 AM