Of minsters and ministers

My choir recently had the privilege of singing services for a week at Westminster Abbey. Here we are in all our glory before the high altar (that's me third from the left in the front row): 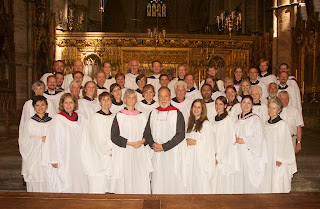 Many people mispronounce "Westminster" as "Westminister", substituting the word they are familiar with, "minister", for the one they don't know, "minster". But "minister" and "minster" are two completely different words.

"Minister" came into English from French in about 1300. It is derived from the Latin minister (servant, priest's attendant, priest, subordinate), which in turn came from  minus (less), the neuter form of minor (smaller, lesser, younger).

"Minster" is much older. It was the Old English (i.e. dating back to about 700) word for a monastery, and is in fact derived, in a much-squished form, from the Latin word monasterium. It is one of a very few Latin-derived words, almost all of them church-related, that made their way into English before the Norman Conquest. Monasterium itself was ultimately derived from the Greek word monos (single), due to the habit of early monks living alone like hermits, before religious communities were established. The word "monastery" did not start to compete with "minster" until the 1400s, when English started borrowing more enthusiastically directly from Latin.

It is typical of English to have at least three words for every notion, one from its Germanic roots, one from French, and one directly from Latin. So by the time we borrowed "monastery", we already had another synonym for "minster", this one derived from Norman French: "abbey". This came into English in about 1300, although the word "abbot" for the head of a monastery had been around as long as "minster" had. It comes from Byzantine Greek ἀββάς, a title of respect given to monks in general, especially to prominent ascetics and abbots of monasteries, ultimately coming from the Syriac abbā (father).

"Westminster Abbey" is, therefore, an etymologically redundant name, literally meaning "Western (because it was to the west of the original city of London) monastery monastery". This redundancy is oh so appropriate, in a place that is inextricably tied in with the government of England, as it underlines the dual Germanic-French nature of our language and history.

But nowadays "minster" survives only in the proper names of Westminster and some other great English churches (York Minster, for instance), as, helped along by the dissolution of the monasteries under Henry VIII, the word "minster" died out in English, leaving people to think it must be "minister" instead.

Westminster Abbey is classified, quaintly, as a "royal peculiar". Tune in next week to find out what this means and what "peculiar" has to do with cows.

For words with a surprising connection to Canterbury Cathedral, where we also sang, please visit this post.