Lots about "a lot"

This picture, which has been circulating on Facebook, bugs me. 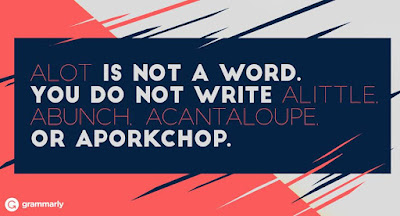 It bugs me a lot.

"Of course it does," you say.  "You're the Word Lady; it must drive you CRAAAAZY when people misspell 'a lot'."

But that's not what bugs me.

What bugs me is the condescending, judgemental, hectoring, "I'm smarter than you" attitude that it reflects. Especially because the people who spell "alot" are actually showing more intuitive sense for the language than the witty person who came up with the absolutely false comparison to "acantaloupe" and "aporkchop" in this image. Ha ha ha, aren't we all smart, we'd never write "acantaloupe"; only idiots would do that.

You cannot do any of this with "a lot" because it is functioning most of the time as one lexical unit, not as an article and a noun, but as an adverb.

It's odd that we don't have a one-word adverb that we can use in a sentence like this. Theoretically, we should be able to say "I like ballet much", but we can't even do that idiomatically. We have to say "I like ballet very much", unless we use the jocular "muchly", which started out as quite a respectable adverb.

"A lot" in its adverbial use is fairly recent in English, dating from the mid-19th century. But it has really caught on:

But all the same, you may say, it should still be spelled as two words. It's not as if anyone can think of another example in the English language where an article/determiner and its following noun became fused as the two became perceived as one lexical unit.

You see, there's nothing to stop us doing this when it makes sense to do so. Oops. "Nothing". There's another one.

Let me make myself clear. Yes, the correct way to spell "a lot" is -- at the moment -- as two words, not as one. But what determines that it is the correct spelling? Convention, that is all.  Considering "alot" as the shibboleth that identifies the illiterate, ridiculing people who misspell it, and making false analogies involving cantaloupes and pork chops says more about the ridiculers than about the ridiculed.There are better ways to teach correct spelling.

And by the way, the verb meaning "to apportion" is spelled "allot".

For the etymology of "cantaloupe", and a tasty cantaloupe cake recipe, click here.