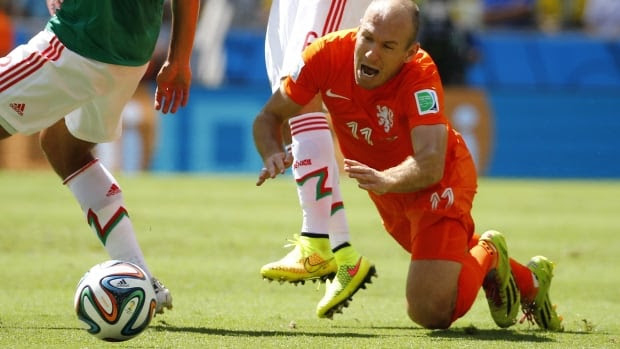 Seeing as, with the World Cup on, it's been all soccer all the time, you may be wondering about the origin of the word "soccer". It comes from the term “Association Football”, which was used in England to distinguish football played under the rules of the “Football Association” from that played under the rules developed at Rugby, a famous private boys' school. “Association Football” being too long to say, people abbreviated “Association” to “Assoc.” and created the word “soccer”.

With that out of the way, let us turn our attention to a word much bandied about in these World Cup games: dive. Of course this provokes many "did he or didn't he?" conversations, not to mention many more conversations discussing whether one should say "he dived" or "he dove".

The verb "dive" is very old indeed, dating back to Anglo-Saxon times (surprisingly, we didn't think to turn it into a noun until several centuries later, in the 1700s). The Anglo-Saxon dýfan , dýfde , gedýfd was a regular transitive verb meaning "to submerge". But it got conflated with another Anglo-Saxon verb, this time an irregular transitive one meaning "dive, plunge" dúfan , past tense déaf , plural dufon , past participle dofen.

The regular conjugation (dive, dived, dived) won out, as is usually the way with these things. But for some reason, an irregular past tense for "dive" cropped up sometime in the late 18th or early 19th century, especially in North America: "dove" (rhymes with stove). Most dictionaries will tell you that the earliest attestation is from Longfellow, but here's one from almost fifty years earlier:

The Lovers of La Vendee: Or Revolutionary Tyranny

The OED suggests that "dove" arose by analogy with "drove", though it offers no explanation for the lack of "diven" in that case.

If you are wondering whether it is ok to say or write, "He dove", there is no reason not to do so. North American dictionaries list it as one of the possible past tenses of the verb. Mind you, they give no advice on whether it is wise to say so when watching a World Cup match with supporters of the other team.
Posted by Katherine Barber at 6:30:00 AM