How do you say "primer"? 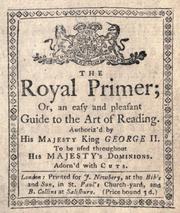 A correspondent has inquired about the pronunciation of the word "primer" in the "introductory textbook" sense.

He noticed that it is often pronounced (or, in his view, mispronounced) "primmer" on the CBC, and feels that this "new" pronunciation is an error introduced by American influence and mindlessly perpetuated by Canadians.

He will no doubt be surprised to learn that nothing could be further from the truth.

"Primmer" is the original pronunciation, and much older than "pry-mer", which seems to date only from the 19th century, likely under the influence of both the spelling, once mass literacy became established, and of the "paint" homonym. There are reasons having to do with the Great Vowel Shift which account for the difference in vowel between "prime" and "primer", but you're probably sick of the GVS by now so I will spare you the details.

As we have seen before with many British/North American differences, older pronunciations and usages brought over here when the first English settlers arrived have often survived on this side of the pond, whereas they have subsequently been corrupted by the British (see this post about herb/erb  and this one about height/heighth, for instance). I use the word "corrupt" in the dispassionate linguistic sense of "change" (but also because I like to provoke people!).

"Primer" in this sense has quite an interesting history. It comes from a medieval Latin word primarium (a prayer book for lay people).  These were often used to teach children how to read, and these "primers" soon became so associated with children's learning that the "first reader" connotations took over from the "prayerbook" connotations of the word. Even after prayers were removed altogether, the word "primer" was still applied to elementary reading books.

I don't think we use "primer" anymore for first readers. It sounds very one-room-schoolhouse to me. But I was surprised to see the types of books that are called primers in this day and age:

A Programmer's Guide to Java SE 8 Certification: A Comprehensive Primer Would you use the word "primer"? And if so, how would you pronounce it?