Slip sliding away: sled or toboggan? 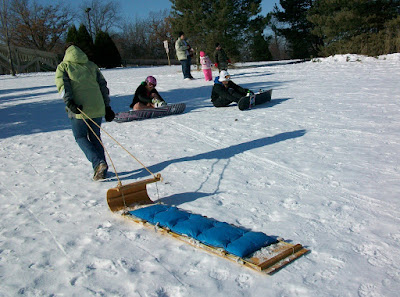 When I was a kid I loved to go tobogganing. My siblings and I would take a toboggan like the one pictured above to our local park and hurtle down the toboggan runs that the parks staff set up each year. Never would I have said, "I'm taking my sled and going sledding". For me, a sled has runners and a toboggan does not.
Furthermore, "sled" is what Americans said for this favourite Canadian winter activity. But it seems to me that I am seeing "sled" more for it. "Toboggan" is certainly not gone: it is the term the City of Toronto uses on its website.
It is hard to compare relative frequencies of "toboggan" and "sled" scientifically since the latter has many meanings other than "toboggan":

But if we look at 1980-83 in Canadian newspapers we find no uses of "sledding" to mean "tobogganing", whereas from 2017 to 2020 there are several.
We inherited "toboggan" from an Eastern Algonquian language, either Maliseet-Passamaquoddy (spoken in New Brunswick and Maine) or Mi'kmaq (spoken in the Atlantic Provinces), probably by way of French. The elements of the native languages mean "device pulled by a cord".
A usage of "toboggan" from the South and Midwestern United States that would leave Canadians perplexed to say the least is illustrated by the following quotes:

1907   Weekly Sentinel (Fort Wayne, Indiana) 24 Apr.   If an infant has been wearing a woolen toboggan this winter, it can now be changed on a warm day to a Swiss bonnet.
1975   Raleigh (N. Carolina) News & Observer 6 Jan. 24/4   The burglar was wearing a red toboggan and tight pants, police said.

Well, now you have a bizarre image in your mind!

This is what we Canadians would call a "toque" (pronounced TUKE), a close fitting knitted cap, originally with a long tapered end (to wrap around your face to keep it warm). Toques nowadays do not have these long tapered ends, though I can attest from my childhood that they were very practical. In the States this was originally called a "toboggan cap" before being abbreviated.

If you're Canadian, have you noticed "sled" creeping up on  "toboggan"? What do you say? Have you ever heard of a toque being called a toboggan?