Throughout December, many charitable souls in Canada turn their attention to the tradition of putting together Christmas hampers for the needy or choosing gift hampers for their friends. Americans, for whom the word "hamper" is used only of laundry baskets, may wonder why we think our dirty unmentionables are the ideal holiday gift (they probably also have trepidations about the "hampers" we bring on picnics!).  But here hampers are baskets of food. 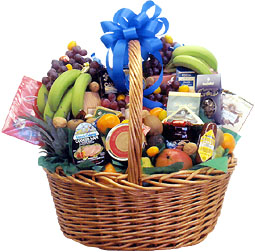 The word was originally "hanaper",  a case designed specifically to hold "hanaps", which were drinking goblets. By about 1500, wicker was the most common material for making hanapers, which by then, because of pronunciation difficulties, had become "hampers". Gradually the idea arose that a hamper was by definition a wicker basket with a lid. Since these were handy for transporting food, hampers became associated with picnics, a custom which dates from Victorian times. The charitable Christmas hamper arose at the same time, but nowadays is more likely to consist of several large cardboard boxes.

The verb "hamper" (obstruct) is unrelated and of unknown origin.
Posted by Katherine Barber at 3:30:00 AM