Can you buckle a swash?

English National Ballet has just premiered a new production of Le Corsaire, a rip-roaring 19th-century classic featuring pirates, slave traders, abductions, opium-smoking, women in bare-midriffed tutus, lots of leaping about, and much derring-do. Inevitably, the word "swashbuckling" is much in evidence in publicity and reviews.

But what is swashbuckling exactly?

The word, which dates from the late 1600s, is not, as you might think, a combination of a noun "swash" (whatever that might be!) and the progressive form of the verb "buckle". Rather, the word was created by a phenomenon called "back-formation", derived from the century-older "swashbuckler", defined delightfully in the OED as "A swaggering bravo or ruffian; a noisy braggadocio". But swashbucklers were not buckling swashes (as the creators of "swashbuckling" apparently thought); they were swashing bucklers.

The verb "swash" arose in the Renaissance, imitating the sound made when something is thrown or moved with great energy, like "swish" but more forceful. In particular, swords were swashed about, and often what they were swashed against was a buckler, not someone who buckles, but a small round shield with a knob-like protuberance in the middle. 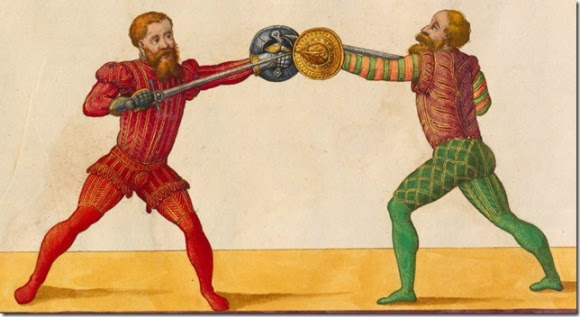 Although we already had the Germanic word "shield" since Anglo-Saxon times, we English have always liked a synonym, so we borrowed "buckler" from the French boucler in the Middle Ages (in Modern French the word for "shield" is still bouclier). The French had got it from the Latin adjective bucculārius, describing objects having a boss like the knob in the centre of this shield. This in turn came from buccula (a diminutive of bucca cheek) which designated either the cheek strap of a helmet or the boss of a shield.

You will have guessed that the word "buckle" is from the same source. In French, the boucle was first the boss in the centre of the boucler, and then the loop or ring serving as a handle, which was affixed behind it, before finally settling down as the device used for fastening such a strap.  Interestingly, whereas in English "buckle" focuses on the metal fastening, French has also retained the "loop" sense.  So a loop-like itinerary is a boucle and so are earrings and big round curls in the hair.

For other examples of back-formation, see my posts about "mentee" and "peddle".

Do you want to know more about the amazing story of the English language? Sign up for my course starting in January 2014. More info here.

Please use the buttons in the left-hand column to share this post on facebook or twitter, or email the link to a friend.
You can sign up to have your word of the week delivered directly to your inbox here.
Posted by Katherine Barber at 3:03:00 AM