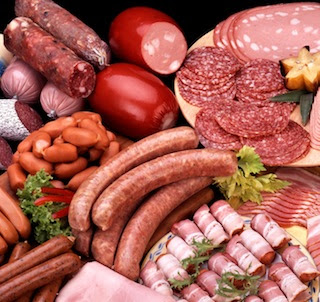 There was a very overblown media brouhaha last week about the health risks involved in eating processed meats.

But there's a much more burning question than "Is bacon going to kill me?", to wit:


Is "processed" pronounced PROSSessed or PROsessed?"

This is another North America/Rest of the World divide:

Is this another example of American pronunciation corrupting the pure unsullied English speech? Quite the contrary. As with so many examples we have seen of North American/British differences, it would seem that "PROSSess" is older and "PROsess" a newer development.

The word has been in the language since the 1300s. John Walker's Critical Pronouncing Dictionary and Expositor of the English Language from 1795 gave only the PROSS pronunciation. Indeed, for the word "progress", subject to the same dual pronunciation, Walker (a prescriptivist whose dictionary's title page famously included the description "Rules to be observed by the Natives of Scotland, Ireland, and London, for avoiding their respective Peculiarities") had this to say:


"This word is frequently, but improperly, pronounced with the first syllable long, as if written pro-gress. But the analogy of pronunciation evidently tends to shorten the vowel in the inseparable preposition when the accent is upon it, and therefore the nouns produce, progress, project &c. have very properly the o in the first syllable short."

So much for Walker's prescriptions, the English went their merry way saying "PRO-gress" and "PRO-cess", influenced no doubt by free-standing "pro".  PROSSess was still listed as an alternative British pronunciation when the first OED published its entry for the word in 1908, but by 1917 was described as "rare" in Daniel Jones's Pronouncing Dictionary, which finally dropped the pronunciation for its 1989 edition.

But meanwhile on this side of the Atlantic we kept the older pronunciation alive.

Another oddity about the word "process" is how people pronounce its plural. Here in North America, in addition to "PROSS/PROsess iz", some people say "PROSS/PROsess eez". This is a bit of a mystery, the best explanation being that people use the "eez" ending by analogy with words like "analyses" and "theses". Whatever the reason, this pronunciation is common enough to be in major North American dictionaries.

How do YOU pronounce "process"? And "processes"? Do you have any feelings about the pronunciations that differ from your own?