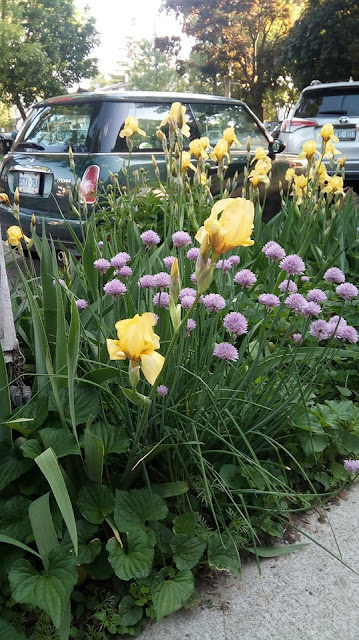 Thank you to everyone who confirmed the Great Budgie/Parakeet Divide. I have to admit, my mind is still blown by this.
Now to something else that goes by different names in different places: the strip of vegetation between a sidewalk and a road. Consider the picture above. This is that thing at Chateau Wordlady (I love irises and chives, what can I say?). You can see the sidewalk in the lower right hand corner.
I call it a boulevard, as I think would most Western Canadians. In the Canadian Oxford Dictionary we have this usage of boulevard labelled "Cdn & Upper Midwest & North Central US".
Wikipedia has dug up an astounding number of names for this, including "parkway",  "verge", "berm", "curb strip", "curb lawn" and even the intriguing "hellstrip". For the full list with their geographical distribution, see here: https://en.m.wikipedia.org/wiki/Road_verge. And please let me know what you say and where you learned that word (although I have lived in Toronto for 30 years, I will betray my Winnipeg roots with this word to the end of my days).
Another boulevard labelled "Cdn & Upper Midwest & North Central US" is the planted median down the middle of a wide road in an urban area. Other names for this elsewhere are "median (strip)" or "central reservation".
Boulevard is more generally used to mean "a broad street, often planted with rows of trees." In Winnipeg, what differentiated this kind of boulevard from a mere avenue or street was a median strip planted with trees.
The model for these was the boulevards of Paris, the first of which was created by Louis XIV's famous military engineer Vauban, who in 1670 demolished the city wall of Paris going from Porte St-Denis to the Bastille, to create a pedestrian promenade. On the modern-day map of Paris you can still detect along this route the outline of the old city wall. I would not recommend strolling down the middle of  Boulevard Beaumarchais today though.
The origin of the word "boulevard" is connected with these city walls.
In the 14th century, both English and French borrowed a Dutch word bolwerc for a defensive fortification, a rampart. By the 16th century this had become "boulevard" in French, and ... "bulwark" in English. The literal military meaning was extended in English to the figurative "powerful defence or safeguard" sense of "bulwark": the Plain English Campaign – a force for the democratic good, a bulwark against jargon, legalese, obfuscation and spin.  In French, "boulevard" continued to designate fortifications, especially the flat horizontal part along the top where sentries walked up and down. So when Vauban eliminated the actual "boulevard", the word survived to designate the broad thoroughfare thus created.
Over the next two centuries, Paris's various city walls came down and were replaced with more "boulevards". British visitors in the 18th century liked to show off that they'd been to Paris by using French words for things they'd seen there ("hotel" was another borrowing from this time) and so we acquired "boulevard", little realizing that it was a doublet of "bulwark".
Parisian boulevards really came into their own with Baron Haussmann's wholesale renovation of the city in the mid-19th century which bequeathed the city with many broad, elegant, tree-lined streets, often tracing the line of the former city walls. Soon every city had to have some, even if they couldn't rival Paris for beauty.
Here's the rather unfortunate Lagimodière Boulevard in Winnipeg.

Well, it's broad. And it's got a centre median. And some kind of vegetation.
Baron Haussmann is no doubt turning in his grave.
Don't forget you can easily share Wordlady posts by email or on social media by clicking on the links at the bottom of the post.
Posted by Katherine Barber at 8:17:00 AM