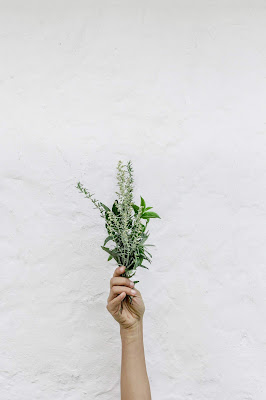 Are you salivating already at the thought of your Thanksgiving dinner? (For those non-Canadians reading this, we celebrate Thanksgiving on the second Monday in October whereas Americans celebrate it on a Thursday in November).
How bland our turkey stuffing would taste without herbs, but why do the British pronounce the "h" and the Americans not? (Canadians are pretty evenly split down the middle on this one).

Many of you may be thinking that this is another dastardly American plot to corrupt the language (for more of these, click here) but in fact it is the British who are responsible for changing the pronunciation,  In Latin, the word was herba, but the "h" disappeared from the pronunciation even before the word migrated into Old French. Being sensible, the French didn't put letters in their words to represent non-existent sounds, so their word was erbe. From about 1200, when it was adopted from French, till about 1500, the word was "erb", with no" h" to pronounce.

The h was added to the spelling in the Renaissance when people felt that English spellings should reflect Latin word origins, but the British (at least those in whose dialect initial h's are pronounced) did not start pronouncing the "h" till the late 19th century, when compulsory education meant that some pronunciations started to reflect spelling. But Americans retained the older pronunciation, and, since the roots of Canadian English are in American English, about 50% of us do too.
For the similar story of the word "history", please click here, and for the story of "heir", click here.