Don't touch that... (whatever)! Fomite 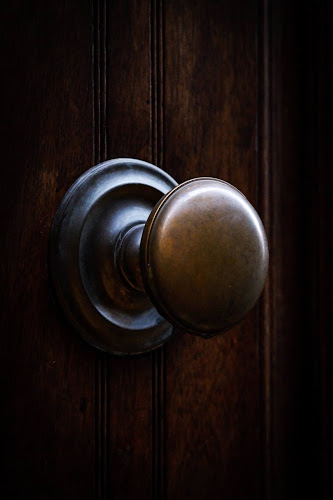 Remember when the object pictured above didn't strike dread into our hearts and cause us to go rushing for the nearest Lysol wipe? Remember when the vocabulary of infectious diseases didn't come trippingly off our tongues?
You may think this is an ordinary doorknob, but you may also have come to learn that in the language of infectious diseases it is potentially a fomite (pronounced FOAM ite), a surface covered with infectious material transmissible from it to our hands and from there to our mucous membranes.
This word has an interesting history, as it is an example of back-formation. Back-formation,

a word that is formed from an existing word which looks as though it is a derivative, typically by removal of a suffix (e.g., laze from lazy and edit from editor)

is a perfectly legitimate and quite common method of word formation. For instance, "kidnapper" came first, and "kidnap" was a back formation from it.
So what's the story with fomite? Originally, when the word was first borrowed into English around the beginning of the 19th century, it was fomes (pronounced FOAM eez), the Latin word for "tinder", since it could "spark" an infection. The plural of fomes was fomites (pronounced FOAM itt eez). But by the end of the 19th century people had back-formed a new singular from this, fomite, and anglicized the pronunciation. I suspect that this was because the singular fomes was very rare indeed, and the word was encountered more in writing than in speech.
Many general and specialized medical dictionaries, still give the fomes/fomites listing, with fomites pronounced FOAM itt eez. Merriam-Webster, however, gives only fomite, with the FOAM ite pronunciation first and, for the plural, FOAM itt eez only as a variant pronunciation. Looking at current corpus evidence, it seems that singular fomite has completely eclipsed singular fomes.
For other examples of back-formation, see my posts about swashbuckling, windsurf, mentee and peddle.

Photo by elias on Unsplash
Posted by Katherine Barber at 12:14:00 PM

Email ThisBlogThis!Share to TwitterShare to FacebookShare to Pinterest
Labels: fomite