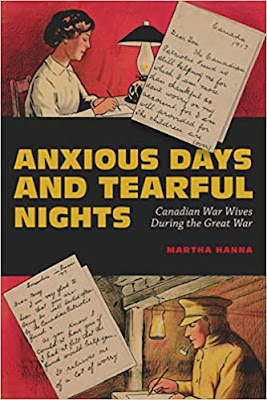 I've taken a bit of a break from Wordlady but hope to return to posting soon.

In the meantime, appropriately enough for Remembrance Day, I would like to acquaint you with my sister's newly published book. It focuses on the impact of the First World War on women at home. It wasn't just the men in the trenches that suffered.
It is available through amazon and in public libraries.

What was it like to be a soldier's wife in Canada during the First World War? More than 80,000 Canadian women were married to men who left home to fight in the war, and its effects on their lives were transformative and often traumatic.
Yet the everyday struggles of Canadian war wives, lived far from the battlefields of France, have remained in the shadows of historical memory. Anxious Days and Tearful Nights highlights how Canadian women's experiences of wartime marital separation resembled and differed from those of their European counterparts.
Drawing on the letters of married couples separated by wartime service and the military service records of hundreds of Canadian soldiers, Martha Hanna reveals how couples used correspondence to maintain the routine and the affection of domestic life. She explores how women managed households and budgets, how those with children coped with the challenges of what we today would call single parenthood, and when and why some war wives chose to relocate to Britain to be nearer to their husbands.
More than anything else, the life of a war wife - especially a war wife separated from her husband for years on end - was marked and marred by unrelieved psychological stress. Through this close personal lens Hanna reveals a broader picture of how war's effects persist across time and space.
Amazon: https://www.amazon.ca/Anxious-Days-Tearful-Nights-Canadian/dp/0228003679/ref=tmm_pap_swatch_0?_encoding=UTF8&qid=1604327743&sr=8-1&fbclid=IwAR0i2cj7L0l4PuI9qaG1D268Gs6ciVZp-SOd2lAlCL3dTZv1kbHaDvtDHPQ
amazon.ca: https://www.amazon.ca/Anxious-Days-Tearful-Nights-Canadian/dp/0228003679/ref=tmm_pap_swatch_0?_encoding=UTF8&qid=1604327743&sr=8-1
Place hold at Toronto Public Library:  https://www.torontopubliclibrary.ca/detail.jsp?Entt=RDM3954106&R=3954106 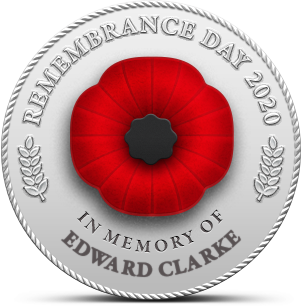 In honour of my great-grandfather who died at the battle of the Somme, October 2, 1916.
Posted by Katherine Barber at 3:29:00 AM