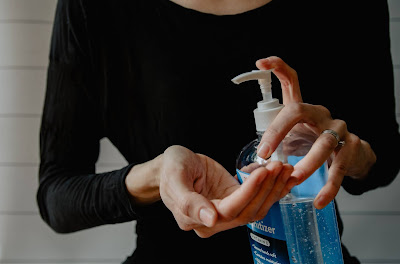 We are all adjured to use sanitizer at every opportunity.

But, if "sane" means "of sound mind", why does its derivative "sanitize" not mean "make someone sane"? After all, they are derived from the same Latin root, sānus (healthy). How convenient would that be, to have some kind of "sanitizing" shampoo which eliminated all kinds of craziness!

But there has been a semantic divergence: "sanitize" and its related word "sanitary"  are for physical health, whereas the root word "sane" and its derivative "sanity" are only for mental health.

"Sane", like so many Latin words, was borrowed into English in the 16th century, a little later than "sanity", at which time both words did refer to physical health (as, of course, sain does in French).  This meaning, however, was subsequently overtaken by the "mental health" sense so that by the 19th century the "physical health" sense was lost. This was probably due to the fact that its opposite, "insane", has only ever meant "of unsound mind", dating from when it too was borrowed in the 16th century. This was true also of its Latin source insānus.

"Sanitize" dates from 1836 and "sanitizer" from the mid 20th century, so they were not in fact derived from what "sane" meant in English at the time but from the original Latin meaning.