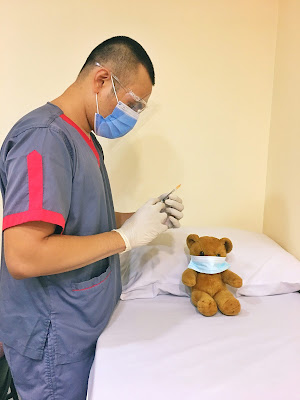 The news is all about the new COVID-19 vaccines. Thank God (and armies of scientists) for them.

But have you noticed that while we in North America will be lining up for our "shots", people in Britain go for "jabs"?

I have to say that "jab" has always had rather violent connotations for me, as if the medical professional were to come hurtling at me and aggressively poke my arm with the hypodermic (possibly even with a blood-curdling yell). I expect for the British these violent connotations have faded away, just as they have for us with "shot".  I doubt that any North American heading into the flu shot clinic has visions of their pharmacist whipping out a gun and unloading vaccine-laden bullets into their arm.

Both of these words seem to have started their injection-related careers in American drug users' slang in the early 20th century. By the 1930s "shot" had started on its path to respectability, and by the 60s was a quite standard term for injections.

By the 1980s "jab" had become the standard term in Britain. I have no idea why British English opted for this while other varieties preferred "shot," but such are the ways of language.

"Shot" is a very old word, dating from Anglo-Saxon times. "Jab" is a much more recent word, dating from the 1820s, but it is derived from an older Scottish word "job", used of a bird poking with its beak, possibly in imitation of the sound made by the bird.

**Please feel free to leave a comment on Wordlady posts below in the "Post a Comment" box. It will not be published immediately as I have to moderate comments to eliminate spam etc. **

Photo by Kristine Wook on Unsplash